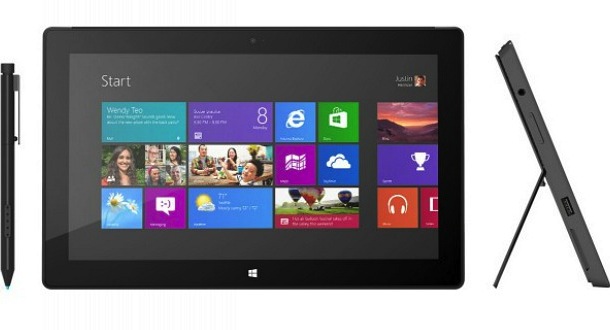 Is Microsoft’s Surface Pro an Ultrabook or a Tablet? Matt Tweety Tverberg, one of Microsoft’s Biz Dev guys in NY, calls it an Ultra Tablet. When you play with one, you’ll see his point.

The Surface Pro tablet is a personal interface for Windows 8 that changes your relationship with the Windows programs you use through touch. It is profoundly different than using Windows 8 on an Ultrabook, laptop or desktop computer.

When Windows 8 came out last October, the reaction was lukewarm. People were just getting used to Windows 7 (which was Microsoft’s apology for Windows Vista) and, remarkably, Windows 7 worked!

Windows 8 was a radical departure. The start button was gone, everything was moved, there was a new graphical user interface and it was a brand new way to use your laptop and desktop computer… in the least efficient way possible. Windows 8 is a touch-based interface and when Microsoft jammed it into keyboard and mouse environment, the experience was somewhat sub-optimal.

Of course, Windows 8 was created to take Microsoft into the Post-PC world, so it needed some Post-PC hardware. Enter “The Surface with Windows RT.” It came out at the same time as Windows 8. The Surface RT ran crippled form of Windows 8 in a tablet form factor. The hardware was mediocre and the software was lackluster. It wasn’t very good – and I’m being kind.

Windows 8 You Can Touch

Last Saturday, February 9, the Surface Pro tablet hit store shelves and almost immediately sold out. Whether demand was at an all-time high or whether it was simply understocked, we may never know.

The important thing to know, though, is that this is exactly the product Microsoft needed to release and exactly the right time to do it. With Mobile World Congress coming up in less than two weeks, now is the time to talk about productivity and connectivity on the go.

You can use it like a tablet: you can do everything you need to do using the touchscreen, and it even comes with a pen that has many, many uses within Windows 8. You can write with it, erase with it and use it as a stylus like you would on any other tablet.

Although the Surface Pro looks like a long, thin iPad, it is nothing like an iPad. It’s twice the weight and it’s a real computer (as opposed to an iOS device, which is not suitable for any Windows-like computing chores).

To use the Surface Pro like a computer, an optional (but definitely recommended) keyboard snaps into the bottom of the tablet and transforms it into a full-featured, powerful ultrabook. There are two keyboards you can buy: a flat, bendable keyboard that costs $99 and a more tactile version with movable keys that costs $129. (I actually prefer the $99 version … it folds thinner and I can actually type a little bit faster with it.)

The Surface Pro rocks an i5 processor, which is the same chip that’s used to power most of today’s mid to high-end laptops. Unlike the lesser Surface RT tablet released in October, the Surface Pro runs the full version of Windows 8, which means it can run any program designed for Windows: Microsoft Office, Adobe CS Suite, Intuit programs like Quickbooks Pro or Quicken, just to name a few. And, by the way, Microsoft One Note is really fun with a stylus.

The display is very nice. It has a full 1080p screen that gets even bigger (up to 2,550 x 1,440) when you connect it to an external display. The Surface Pro also comes with a USB 3.0 port, and has an external memory card slot, which is almost assuredly going to be used on a daily basis given the lack of free space after formatting and the restore partition has been allotted.

One other annoyance: the battery life on the Surface Pro is only about four hours. But since the device is WiFi only, the limitation can be worked around. Microsoft has already addressed concerns about the battery life and the space issue, though, and has also hinted that future accessories could improve the battery life.

How Does This Fit Into My Life?

While heavy for a tablet, it’s very light for a laptop. Even with the keyboard factored in, it’s still lighter than nearly any laptop out there … and far more portable. You can stick it in your purse, briefcase or backpack and almost forget it’s there.

Taking a plane ride to Barcelona with me for Mobile World Congress? You have an entertainment machine and a work machine in one sleek package. That’s exactly what you need in today’s Post-PC world.

Should I Buy One?

Do you want a tablet for web browsing, games and a little work? You can buy an iPad for about half the cost and have access to the best App Store in the world.

Do you want a computer that delivers the most bang for your buck? You can buy an Ultrabook that’s a little more powerful for a few hundred dollars less.

But if you’re in the market for a new, fully functional Windows 8 computer, and you like the idea of a tablet, the Surface Pro was designed with you in mind. The ability to run every Windows program you have on a two-pound tablet feels like a game-changer. But, then again, we’re in the early days … a Surface Pro Mini can’t be too far off.

Shelly Palmer is Fox 5 New York’s On-air Tech Expert (WNYW-TV) and the host of Fox Television’s monthly show Shelly Palmer Digital Living.  He also hosts United Stations Radio Network‘s, Shelly Palmer Digital Living Daily, a daily syndicated radio report that features insightful commentary and a unique insiders take on the biggest stories in technology, media, and entertainment. He is Managing Director of Advanced Media Ventures Group, LLC an industry-leading advisory and business development firm, as well as Technology Chairman and a member of the Executive Committee of the National Academy of Television Arts & Sciences (the organization that bestows the coveted Emmy Awards). Mr. Palmer is the author of Television Disrupted: The Transition from Network to Networked TV (2008, York House Press), Overcoming The Digital Divide: How to use Social Media and Digital Tools to Reinvent Yourself and Your Career (York House Press, 2011) and Digital Wisdom: Thought Leadership for a Connected World (York House Press, 2013). Shelly can be reached at shelly@palmer.net For information visit www.shellypalmer.com.

Microsoft Surface Pro X , one month later — ARM laptops are the future, but Windows is stuck in the past

Neowin3 months ago
You Are Here