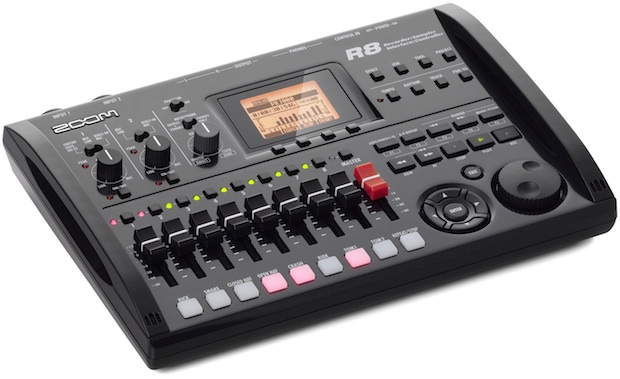 Zoom introduced the all-new R8 for capturing audio on-the-go. It combines four production tools in one compact, versatile device. In addition to being an 8-track playback/2-track simultaneous recorder that utilizes SD memory, the R8 is an audio interface, a control surface and a pad sampler.

With a sampler function that consists of eight voices, the R8's built-in drum sounds can be triggered using eight pads to assign sounds to each track and create loops. You can also use the unit's drum machine to create original backing beats, or simply output a metronome for tempo control. Not only does the R8 offer over 500 drum patterns to work with, it also includes a 2GB SD card containing 500MB of drum loops recorded by Big Fish Audio.

The R8 comes with a 2GB SD card and supports up to 32GB SDHC cards for a maximum of 100 track hours. Using SD media for recording not only makes the R8 lighter and more portable, it also ensures increased reliability with no concern for a crashing hard drive.

Take your R8 into your studio and record additional tracks using its USB audio interface. Then when you're ready to mix, use the R8's control surface capabilities to manage each function of your favorite DAW software. Choose from over 140 built-in studio effects to enhance your recording and use the pro-quality mastering effects to complete that studio sound.

With the new R8 from Zoom, versatility, control and comprehensive features come together in a single device that fits in a guitar case.

Price and Availability
Available now for $299.