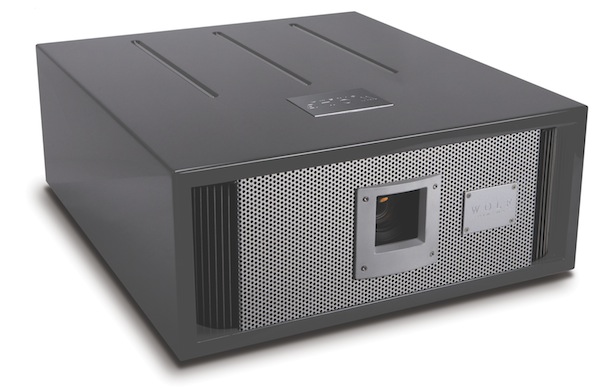 Both the SDC-8 and SDC-12 are built around next-generation, three-chip, D-ILA light engines. D-ILA is an advanced LCoS (Liquid Crystal on Silicon) technology from JVC Kenwood, which produce stunning film-like images from all standard and high definition sources. The SDC-8 delivers uncompromised full HD (1920×1080) resolution for use on very large home theater screens, while the SDC-12 adds our V4K engine technology to achieve Ultra HD (3840×2160) on screen resolution. Both systems achieve their razor-sharp images via the extended-throw Wolf Cinema VariScope primary optics: with VariScope and with the touch of a button, one can quickly select from multiple aspect ratios such as 16/9 (1.78:1) when viewing television content, then quickly resize to watch 1.85:1 aspect ratio films, enjoy breathtaking 2.20:1 aspect ratio movies such as Patton and Lawrence of Arabia and then switch to view today’s most popular 2.35:1/2.40:1 films on a constant height, ultra-wide-aspect ratio CinemaScope home theater screen. And for true film aficionados everywhere, two precision VariScope FX fixed cinema anamorphic lens assemblies are also available as options – especially useful when taking advantage of the full installation range of the projector’s primary optics.

Each hand-calibrated GRAYWOLF projector is delivered with our advanced SD/HD video processing algorithms. A wide selection of system memories are provided so that one can quickly match the source to the optimum film or television calibration settings, thus achieving the very best image possible. A new, user-replaceable 230W NSH lamp is included which can deliver between 3000 to 4000 hours of viewing enjoyment. Both projection systems are complemented by optional Wolf Cinema 3D shutter glasses and 3D signal emitters, for that ultimate experience in 3D imaging realism. And like all Wolf projectors, the GRAYWOLF engines are designed with a highly-efficient thermal chassis for extended projector and lamp life. Multiple whisper fans help keep the light engine at optimum running temperatures by routing cooling air in a rear-to-front design, while facilitating a wider range of placement options for our custom installation experts.

Both the GRAYWOLF SDC-8 and SDC-12 projectors are delivered in an elegant gloss gray cabinet, and provide for dedicated IR (Infrared), LAN and RS-232 system control capabilities. Both systems feature two HDMI 1.4 inputs, one set of component inputs and more (plus a dedicated PC input on the SDC-12). Lastly a WC-PM-M projector ceiling mount kit is available to facilitate ease of installation.