Eliminates cable clutter and connects to your PC, set top box, Blu-ray player and more for wireless audio and video streaming to your HDTV

Warpia introduced the StreamEZ, a wireless HDMI streaming kit that will allow users to wirelessly bring audio and video content to their HDTV via an HDMI output. A truly plug and play kit, users will be able to connect the StreamEZ to their PC/Laptop or any device with an HDMI port such as Cable/Satellite boxes, Blu-Ray/DVD players and game consoles to enjoy wireless high definition streaming.

For PC/laptop users, the StreamEZ allows any PC content such as videos, pictures, movies and presentations to be viewed via an uncompressed HDMI signal in full 1080p (1920 x1280) resolution. Additional content from popular video streaming sites such as Hulu, Netflix, CinemaNow, YouTube and Amazon Video on Demand can also be streamed with ease. For multi-takers and parents, the Warpia StreamEZ allows one to conduct work or other activities such as email and web surfing on their laptop screen while simultaneously streaming video to their TV. 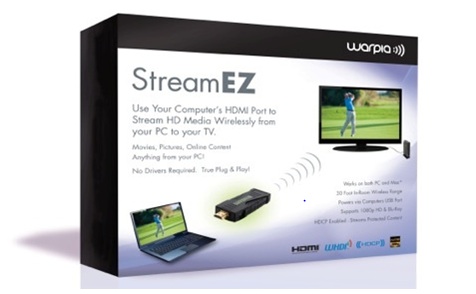 In A/V applications such as Cable set top boxes or Blu-Ray players, the unit will no longer need to be close to the HDTV. Just plug the StreamEZ into the units HDMI output and avoid the hassle and considerable cost of having to run new cables.

Additional features and functionality include:

“Warpia StreamEZ is the first product on the market to offer the versatility of PC streaming combined with wireless HDMI functionality for set top boxes and Blu-Ray/DVD players,” says Mike Walsh President of Warpia. “The StreamEZ is a solution that provides consumers with maximum entertainment options whether they are watching a movie from their set top box or streaming content from their PC, they can now do it without the clutter of cables.”

Price and Availability
The Warpia StreamEZ (model SWP700) is available now for $219.99.