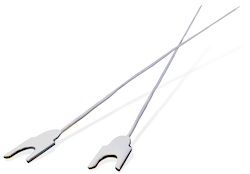 Walker Audio announced the Eliminator Directional Antennae, which improves systems by cleaning up electromagnetic and radio frequency interference (EMI/RFI) and stray electrical noise in the room and channeling them to the system ground at the negative speaker terminal in the user's amplifier.

“Like our entire line of high-quality accessories, the Eliminator can improve anyone's home theater or stereo system almost immediately,” says Lloyd Walker, President and Founder of Walker Audio. “EMI, RFI and other noise can affect the transmission of the audio and video signal through the system. There is a degradation of the data that is supposed to be there and the addition of signal that is not supposed to be there. This means that your system is not accurately reproducing your LPs, CDs, and DVDs and it will not look and sound as good as it should. Adding the Eliminator will help you get rid of a problem you probably didn't even know you had.”

The Eliminator is a pair of high-speed directional antennae made of pure silver wire with pure silver spades at one end of each wire. The wire has been tested for directionality and treated cryogenically with a deep immersion process. By attaching the spade ends to the negative binding posts of an amplifier, users will hear a difference in as little as 30 minutes and will have 90% break-in in 20 hours.

In addition to the Eliminator, Walker Audio also makes products to eradicate the negative effects of dirt, electrical noise, vibrations, static electricity, and other factors that impede and alter the pure audio or video signal. The accessories help reveal the true potential of LPs, CDs, DVDs and BluRay disks regardless of the level of the users system.