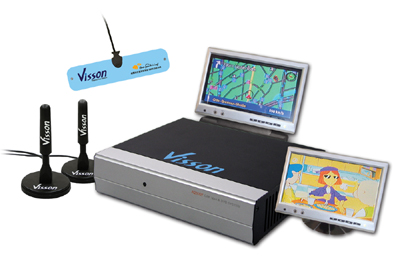 “Visson has already demonstrated their R&D capabilities with regards to GPS Navigation, digital TV, and with convergent technologies, and we plan to further refine our wide range of innovative solutions”, stated James Wu, CEO for Visson Technologies, today. “Our GPS Navigation modules have been showcased at 4 consecutive global tradeshows so far, and we expect a huge response worldwide once the product shipping date has been announced”, Wu further added.

A demo of the A2000T Navigation and Digital TV system can be viewed at Car+Sound 2005 in Sinsheim (April 7-10, 2005), at Hall 6, Booth #6702. Visson announced the March-release of their Auto PC (2G) at the recent CES consumer show in Las Vegas. The final shipping-ready date for the A2000T will be announced later in 2005. An advanced model of the A2000T will be launched at COMPUTEX TAIPEI 2005 (May 31- June 4), complete with navigation, DTV, multimedia and connectivity components, and also ready for shipping in 2005. Visson’s digital convergent products will also feature at the IFA show in 2005.

“Visson entering the market with full force… Solid backing by VIA…”
“With the current trends in convergent technologies, car navigation systems and digital TV solutions is undoubtedly the way to go, and we are determined to enter the market with full force,” said Sherry Tsai, Sales Director for Visson Technologies. “As a recognized member of the VIA Technologies Group, we receive all the benefits and a strong backing from our corporate business partner, enabling us to fully utilize our strength as a dynamic middle-sized innovation company,” Tsai added. “Essentially, Visson is about innovation, creativity and passion — our driving force is to take on innovation challenges that the mere-manufacturer crowd steer away from, and being at the absolute forefront of technology. In addition, we aim to have a global conscience in doing so.”

Combining Navigation with DVB-T
By combining DVB-T digital TV and a CD/MP3/VCD/DVD player with a navigation system, Visson’s A2000T promises to offer the ultimate in-car entertainment experience, enabling motorists to watch DTV, see a DVD, and simultaneously utilize a navigation system along their journey. The navigation system benefits motorists from a road-safety and convenience point of view, by providing the best routes to destinations, pointing out obstacles, and offering numerous other functions. GPS will play a significant role in future automotive generations, similar to its role in aviation technology today.

About Visson Technologies
Visson Technologies, Inc., a member of the VIA Technologies Group, specializes in the design and manufacturing of digital TV and multimedia consumer products, with its main focus on digital television receivers for home entertainment, mobile and handheld products. Our aim is to design digital TV receivers compliant with global digital TV standards, including DVB-T, DVB-H, ATSC and ISDB. Further to its digital TV solutions, Visson diversifies across a wide spectrum of cutting edge technologies, including navigation systems, car PC’s and smart TV’s, and integrating these with their range of DTV receivers.