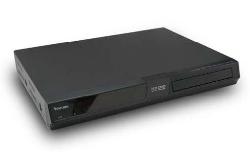 Venturer Electronics today announced the launch of its first HD DVD player for the North American market. Responding to strong consumer demand for high definition video playback devices, Venturer will introduce the SHD7000 that offers the superior HD movie experience as defined by the DVD Forum.

Featuring 1080i video output and an HDMI connection, the SHD7000 is designed to be compatible with the vast majority of HDTVs already in North American consumers’ homes. With Ethernet connectivity to the network, the SHD7000 also allows users to access bonus features from movie studio web servers and unlock special prerecorded content on some HD DVD discs.

Dolby TrueHD rounds out the high definition experience by presenting the HD DVD disc soundtrack as it was meant to be heard, virtually equal to the studio master. In addition to its HD DVD playback capability, the SHD7000 will upconvert standard DVDs to near HD picture quality via its HDMI connection, allowing a consumer’s existing library of DVDs to look better than ever. CD playback is also supported.

The SHD7000 will be distributed in North America by Venturer Electronics of Markham, Ontario, and sold through national retailers with retail prices expected to be one of the lowest among entry-level HD DVD players.