The PSX-2 redefines the concept of the iPod dock, offering unprecedented and rich control, and turning the popular portable multimedia player into a fully integrated and highly functional source on a home media network.

Universal Remote Control, Inc. (URC), the pioneer in control technology, today announces the PSX-2 Personal Server, which enables custom installers to deliver unmatched iPod docking functionality to consumers who seek truly integrated home entertainment experiences. With the PSX-2 Personal Server, users can control iPods like never before, all from the comfort and convenience of the same remote controls they use to control their TVs and home audio systems–and with a much higher and more customized level of control than is available on the iPod itself.

Current iPod docks provide on-screen TV interfaces that functionally mimic the iPod interface, but because the iPod is based on a limited number of buttons and a small screen, users must tediously navigate up and down through a series of nested menus, and must internalize a “mental map” of where special features are accessed. With the help of their custom installers and the PSX-2, users can more easily exploit all of the iPod’s features, including some obscure and rarely-used ones, with the touch of a single button. It’s easy to create playlists on the fly, shuffle music, create favorites, and sort music using a variety of parameters–all with far fewer button presses than would be required with the standard iPod interface.

The PSX-2 provides hundreds of discrete IR codes that cover virtually every iPod function, and even functions that aren’t available on the iPod itself, such as commands for each of the iPod’s EQ settings and the ability to perform alpha searches. Through the remote and a connected TV, or even without a TV using URC’s top-of-the-line MX-6000 Touch Screen, users enjoy the type of vibrant and colorful user interface previously available only with dedicated music servers. URC’s innovative KP-900 Wireless Keypad can be used with the PSX-2 to enjoy an iPod stream in a second zone in the house, such as the kitchen.

The PSX-2 enables an iPod to function similarly to a more expensive dedicated music server, delivering a rich level of metadata, such as Cover Art, Artist, Album, Song, Track Number, Elapsed time, Shuffle and Repeat. Shortcut keys allow direct access to Playlists, Artists, Albums, Songs, Genres, Videos, Music Videos and Podcasts. The PSX-2’s 12 different shuffle options, such as “Shuffle all Songs,” “Shuffle this Artist” and “Shuffle this Genre,” are all on one screen and easily accessible. The user can access cool features like “Play More from this Artist”, “Play More from this Album” and “Play More from this Genre,” while the PSX-2’s Jukebox feature makes creating an ongoing playlist for a party a breeze; users can even listen to tunes while browsing and adding music to the jukebox. Even iPod-based video benefits from the PSX-2. Its HD-quality component video output provides the best picture quality the iPod has to offer.

For the utmost in convenience, an iPod docked in the PSX-2 can sync to any PC or Mac on the home network, so you can always keep the iPod stocked with your latest iTunes downloads and photos. The PSX-2 also continuously charges the iPod, so it’s ready to go when you are.

The PSX-2 works with most IR universal remote controls, as well as most RF remote controls when used with a base station or URC’s MSC-400 Master System Controller. It is now available through approved URC dealers and installers for $399 MSRP.

About Universal Remote Control
Universal Remote Control, Inc. (URC), is The Pioneer in Control Technology. Founded in 1991 and headquartered in Harrison, N.Y., URC has sold more than 50 million remote controls in the last 10 years alone. A world leader in high-quality remote control design, engineering, manufacture and distribution, URC is widely regarded as a category innovator by consumers, retailers, custom installers, subscription broadcast providers and OEM partners. URC has built its reputation by delivering exceptional levels of quality, training, reliability and support to its customers. Visit URC at www.UniversalRemote.com. Installers can keep up to date with the latest URC news, training and support, as well as communicate directly with the company and their peers, at www.URCControlRoom.com.

The Gadgeteer3 months ago

The Verge2 years ago

The Gadgeteer2 years ago
You Are Here

Accessory Enables A/V Control via Smartphone, Tablet, Watch or Voice Kansas based Flyover Innovations, Inc. has attempted to solve the universal remote problem with an... 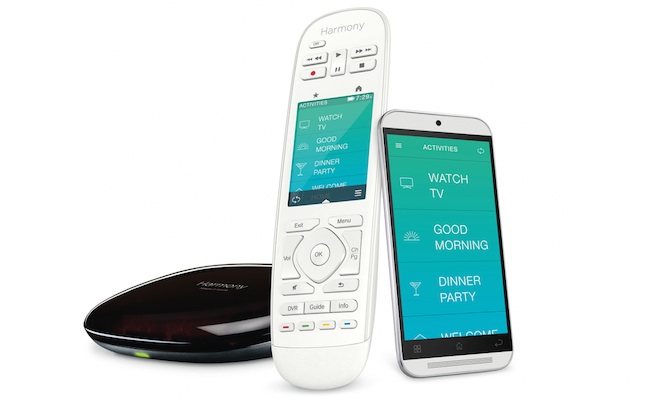 Logitech announced the new Harmony Living Home lineup to control every device in your home, including lights, shades, locks, thermostats, stereos, HDTVs, and anything...