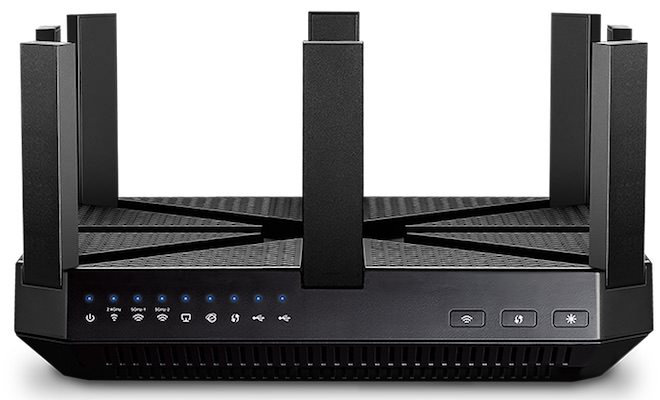 TP-LINK today announced the Talon AD7200 Multi-band Wi-Fi Router, the world’s first multi-band router based on 802.11ad — the latest, most powerful innovation in wireless technology. Powered by the 802.11ad and 11ac MU-MIMO solutions from Qualcomm Atheros, Inc., a subsidiary of Qualcomm Incorporated, the AD7200 Wi-Fi Router delivers ultra-fast speeds of up to 4.6Gbps on 60GHz bands.

The router uses a new frequency with untapped bandwidth and channels at 60GHz. It also utilizes existing 2.4GHz and 5GHz bands, resulting in combined unprecedented 7 Gbps Wi-Fi speeds throughout the home as well as combines 802.11ad with 802.11ac MU-MIMO to provide a step up in capacity. Superior to the standard dual-band structure, the router transmits locally stored media and content from the cloud drastically faster, ensuring that devices function at prime performance. With the TP-LINK Talon AD7200 Multi-band Wi-Fi Router, consumers can download an entire feature-length 4K HD video in about four minutes or transfer a thousand photos to a storage device in approximately five seconds, without any concerns about network interference.

Price and Availability (May 18, 2016 update)
The Talon AD7200 Multi-band Wi-Fi Router with a MSRP of $349.99 USD is available exclusively online at NewEgg.com and exclusively in-store at Fry’s and Microcenter retail locations.