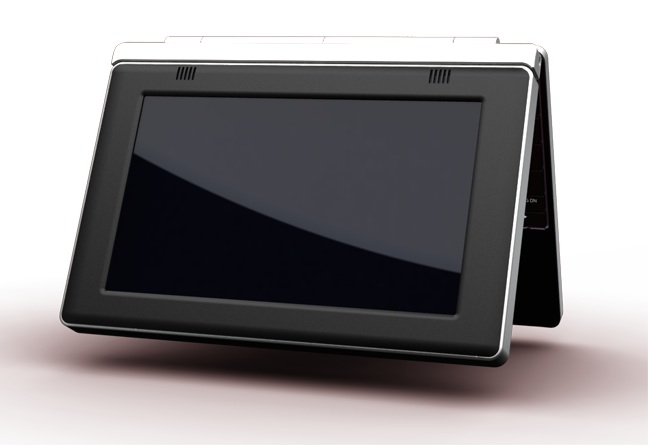 Provides Three Times the Battery Life at Under Two Pounds

Always Innovating today unveiled the Touch Book, a versatile new device that works as both a netbook and a tablet thanks to a detachable keyboard and a 3D touchscreen user interface. The Touch Book, previewed at DEMO 09, weighs less than two pounds as a netbook and has a battery life of 10 to 15 hours — three times longer than most netbooks.

“The Touch Book is perfect for these tough economic times because you can use it in so many ways,” said Gregoire Gentil, founder of Always Innovating and creator of the Touch Book. “You can use it as a netbook computer, a hand-held game device, or a video player. You can even reverse the keyboard to prop it up on a table in an inverted ‘V’. Finally, because it is magnetic, you can remove the keyboard and put the tablet on the fridge to serve as a kitchen computer or digital frame.”

The Touch Book combines the best of open source software and open hardware with a sleek industrial design by designer Fred Bould. The innovative design includes internal USB plugs. “I hate having dongles hanging from my laptop – I often end up disconnecting them accidentally — so we opted to put the USB inside,” said Gentil.

The Touch Book is the first netbook featuring an ARM processor from Texas Instruments, resulting in outstanding battery life, and a fan less, heat-and-noise-free system.

According to Chris Shipley, executive producer of the DEMO Conferences, the Touch Book’s innovative architecture and industrial design earned it a spot on the DEMO conference stage. “The longer battery life is a boon to netbook users. But the Touch Book’s versatility – its ability to function as a netbook as well as a standalone touchscreen tablet – makes it a breakthrough product,” said Shipley.

The Touch Book is expected to ship in late spring and will start at $299. Advance orders can be placed at http://www.alwaysinnovating.com/store/.

About the Company
Founded by serial entrepreneur Gregoire Gentil, Always Innovating leverages the latest developments in open source technologies worldwide to create innovative products that solve real problems for consumers. The company is based in Menlo Park, Calif.