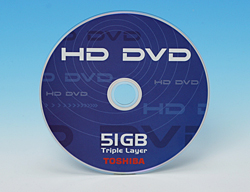 Toshiba Corporation underlined the versatility and high capacity of the HD DVD format with the announcement that the company has developed a triple-layer HD DVD-ROM (read only) disc with a capacity of 51 gigabytes. The new disc can store up to 7 hours1 of high-definition video and adds an extended capacity, high-end option to the already extensive line-up of HD DVD-ROM discs. Toshiba aims to secure approval of the new disc by the DVD Forum within this year.

The new ROM disc has a three-layer structure, with each layer storing 17GB of data. The advances capacity over current ROM discs, which hold 15GB of data in each layer of a single-sided disc. Continued improvement in disc mastering technology has achieved further minimization in the recording pit, supporting a further boost in capacity to 17GB in single layer and a full 51GB on a single-sided triple-layer disc. Toshiba has confirmed the disc structure and its successful operation.

Toshiba featured the new disc at the International Consumer Electronics Show (CES) 2007, in Las Vegas, Nevada from January 8 to 11, at the Toshiba booth.

*1 Recording capacity at a sampling rate of 17 mbps.