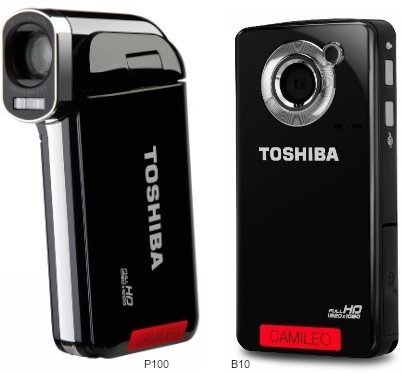 Toshiba introduced two ultraportable 1080p full HD pocket camcorders offering superior zoom capabilities for under $200. Compatible with Windows-based and Mac OS systems, both camcorders offer impressive zoom capabilities and double as 16-megapixel still cameras with dedicated recording buttons, enabling consumers to carry around a single device to capture all of life's moments in the highest quality videos and photos. These camcorders also have a host of features that include motion detection, time-lapse, face tracking and webcam mode.

CAMILEO P100
The pistol-shaped CAMILEO P100 is extremely portable, weighing a mere 4.7 ounces. The device also features superior zoom capabilities as both a camcorder and camera. The P100 offers a 5x optical zoom and a 16-megapixel photo resolution that leverages real-time interpolation when in camera mode. When being used as a camcorder, users can take advantage of the 8x advanced zoom to crisply capture details found in far-off scenes. Advanced zoom extends optical zoom to create a superior image than traditional digital zoom. This model also includes pause recording that allows the user to pause and resume during recording, creating one continuous file instead of multiple files for easier uploads to social networking sites. Designed with image stabilization that supports up to 1920x1080p, the CAMILEO P100 creates brilliant videos that can be comfortably viewed on its swiveling three-inch diagonal LCD touchscreen display, all for a starting price of $179.99.

CAMILEO B10
The CAMILEO B10 is equipped with a two-inch diagonal LCD screen on the back of its candy bar shape and weighs a mere 3.0 ounces, making it ideal to slip in a back pocket or evening clutch. The 16x digital zoom allows consumer to get right in on the action. This camcorder is ideal for the person who wants a compact, full HD camcorder that takes beautiful still photos but doesn't cost a fortune, starting at $119.99.

Both the camcorders allow consumers to conveniently view videos and still photos directly on an HDTV via the HDMI port. Another key feature found in both camcorders is the Internet Upload Button (for Windows-based systems), which allows users to easily and quickly share their videos and photos on YouTube, Facebook, Twitter and Picasa.

Availability
The CAMILEO P100 and CAMILEO B10 are now available for purchase at ToshibaDirect.com and a variety of major consumer electronics and computer stores nationwide.