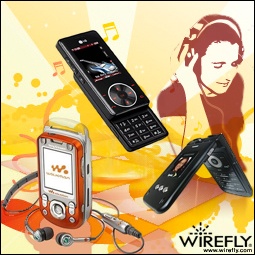 “Music phones are cell phones that allow users to import MP3 music files or iTunes from their PCs or download them wirelessly from a content provider. These types of cell phones are our fastest-growing category of wireless handsets,” said Brian Westrick, President of Wirefly. “Music phones only joined the cell phone lineup last year. Still, over 50 million U.S. consumers will be using over-the-air wireless music services by 2010 according to IDC. We see music as an enormously popular feature in the wireless market today.”

Wirefly.com has become a bellwether for consumer trends in wireless, as tens of thousands of people purchase cell phones and rate plans on Wirefly every month after comparing hundreds of phone models from all the major carriers. With that many shoppers, Wirefly has great insight into cell phone trends and more importantly, consumer buying behavior in the wireless market today.

According to Wirefly, the 5 most popular music phones are:

As the back-to-school season begins, cell phone manufacturers are introducing new models with more advanced music features to rival most portable music players. The new LG Chocolate, which will be released by Verizon Wireless this month for example, is generating a lot of buzz. The LG Chocolate features an iPod-like click wheel and a memory card that can hold up to 1,000 songs.

The Motorola SLVR L7 delivers both form and function. The SLVR L7, which also supports iTunes, is a thin candy bar cell phone and comes in hot pink or black. The new Verizon Wireless RAZR v3m takes America’s favorite cell phone and adds a music player. Other phones which grew quickly in popularity among the music-loving crowd were Samsung’s A920 for Sprint and the A950 with V-CAST for Verizon Wireless. Both feature external music controls and expandable memory card slots to hold music files.

Technological improvements and an increasing appetite for portable music have fueled interest not only in all-in-one cell phones, but also in robust content services. Some of the newest music phone models take entertainment to the next level. Music phone models like Sprint’s LG Fusic LX550 and the Virgin Mobile Sonic, are truly designed to replace stand-alone music players. These multimedia phones offer advanced content services like live streaming downloads, satellite radio and FM broadcasting, and superior sound quality.

In the recently published ‘U.S. Wireless Music 2006-2010 Forecast and Analysis’, IDC also reports that “Mobile music storefronts are emerging as one of the most important new channels for fans to discover, purchase, and enjoy full-track music and related content” Music cell phones will soon surpass stand-alone mp3 players in terms of popularity. Wirefly also provides mobile content and ringtones downloads via its site Mfly.com.

About Wirefly
Launched in 2003, Wirefly is an online leader in one-stop comparison shopping for cell phones, wireless service plans and wireless accessories. A wholly-owned subsidiary of InPhonic, Inc. (NASDAQ:INPC), Wirefly is an authorized dealer for every major cellular carrier, including Cingular Wireless, Verizon Wireless, T-Mobile and Sprint. Wirefly also offers discounts and services not available in retail wireless stores, including real-time online order status and tracking, and the guaranteed lowest price – online or anywhere else — on cell phone devices from Motorola, Nokia, Samsung, LG, BlackBerry and many other cell phone handset manufacturers. Wirefly.com has been named Best of the Web by Forbes magazine as the “best all-around number portability portal” and “Best in Overall Customer Experience” by Keynote Performance Systems. For more information on Wirefly, its wireless products and its services, visit wirefly.com.