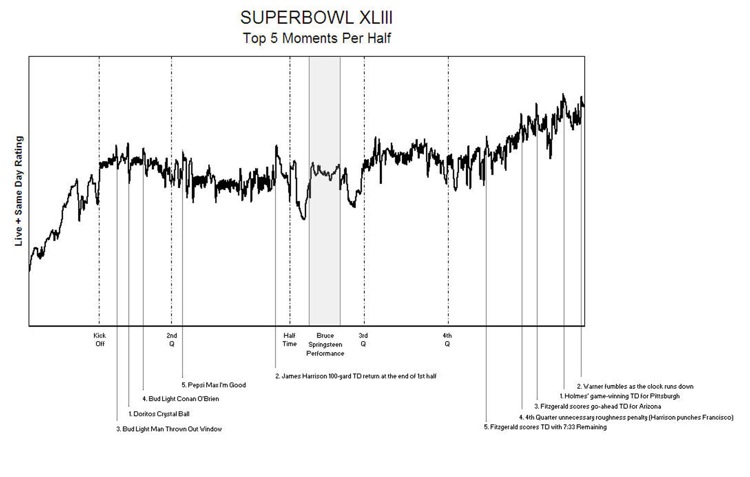 GoDaddy.com finally broke through this year, snatching the coveted crown from the E-Trade talking baby, which couldn’t repeat this year despite similarly themed follow-up spots. This is the first top ten finish for GoDaddy, infamous for a too-hot-for-TV campaign it has utilized the past couple Super Bowls. The Internet domain company apparently benefited from the game’s dramatic finish, as their fourth quarter spot had far more viewership than the ad the company ran in the first quarter. And Bud Light does it again, this year another clear winner holding two of the top ten spots.

With unemployment rates rising from coast to coast, two job Websites cashed in on grabbing viewers’ attention, with Careerbuilder.com claiming the number three slot and competitor Monster.com landing at number six. Doritos continues to ride a user-generated strategy to strong success, with this year’s entrant earning a number four ranking. Annual list occupants Bud Light, Pepsi and Coke held their own, with each brand occupying a piece of the top ten. First time Super Bowl advertiser Denny’s cracked the top ten thanks to the last five seconds of the ad, in which the chain unveiled a free Grand Slam breakfast offer. Also, the movie preview for the upcoming Transformers sequel marks the first time a movie trailer landed on the TiVo top ten list since 2003 when both Universal Pictures Bruce Almighty and Sony Pictures – Charlie’s Angels Full Throttle made the list.

Prior to the game much was made about 3-D advertisements, but consumers apparently didn’t grab their 3-D glasses in time, as spots such as a preview for Monsters vs. Aliens fell well short of the pace, barely cracking the top fifty.

“This year TiVo viewers were in control of one of the greatest NFL games ever played, a perfect example of the power of pressing pause or rewind during a live-action event,” said Todd Juenger, Vice President & General Manager, TiVo Audience Research and Measurement. “Topping the drama and excitement of last year’s big game probably seemed impossible for many advertisers, but this game truly delivered, especially for those who chose time slots towards the end of the game. TiVo’s Stop||Watch is the only service that can release ratings based on actual viewer behavior, rather than surveys or after the fact polling. It is an insight that is unique to TiVo, one we can take advantage of not only for the Super Bowl, but throughout the year, benefiting ad agencies, TV networks, and brand customers alike.”

In the first half of the game action on the field was overshadowed by commercials, with four of the most rewound moments involving advertisements. The most viewed moment of the first half was the Doritos Crystal Ball spot, impressive considering it beat out James Harrison’s record breaking interception return at the end of the half. In the second half action intensified on the field, with the top-replayed moments all happening inside the hash marks. The most viewed moment was Santonio Holmes’ tip-toe touchdown grab that gave the Steelers the lead in the final minute. Despite more replays of game action, viewership increased in the fourth quarter enough that GoDaddy’s spot earned more eyeballs than the Doritos ad of the first half.

The top ten rated commercials of this year’s game were:

TiVo’s audience measurement analysis is based on aggregated data from a sample of approximately 30,000 anonymous households with the Emmy-award winning TiVo service. TiVo viewership information gauges the interest in programming content by measuring the percentage of the TiVo audience watching in “play” speed.