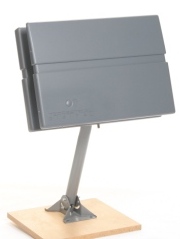 August 11, 2006: EUREKA, MO — HDTV antenna manufacturer Terrestrial Digital has discovered a series of design efficiencies in recent research that has allowed them to produce their Lacrosse HDTV antenna at a lower cost. As a result, they’ve passed on a price break to customers.

Terrestrial Digital has announced a price drop on the Lacrosse at web-based retailer AntennasDirect.com. The Lacrosse is now available for $129.99 for the standard version, and $149.99 for the amplified version at www.antennasdirect.com.

The Lacrosse was released earlier this year as a medium range outdoor antenna designed to access HDTV programming within 40 miles of the transmitting antenna.

The Lacrosse has received critical acclaim for its performance and aesthetics. It has also been featured in HDTV Etc. Magazine, Widescreen Review Magazine, at TechLiving.com, and in a recent podcast by The HTGuys.com.

Terrestrial Digital is a St. Louis based manufacturer and distributor of off air HDTV antennas. The company was founded in 2003 by Richard Schneider, and continues to be recognized for superior products by the HDTV community. For additional information on Terrestrial Digital, visit www.terrestrial-digital.com.