The TechDAS Air Force ONE Turntable System is the brainchild of the CEO of Japanese premier distributor, Stella, Inc. and ex-Director of Micro-Seiki, Mr Hideaki Nishikawa. He worked with a team of engineers and technicians from the old Micro-Seiki, and the technicians and engineers in Stella, Inc. who had for years been servicing and supporting various brands of turntables that they distributed in Japan. The result is a technological tour-de-force that encompasses the best, and overcomes every weakness of all of the turntables in their collective hundreds of years of experience.

“As engineers and scientists we know that digital sound is better in all measures and specifications. However, as listeners and music lovers we feel that analog sound is still analog sound and to our ears it is still superior. With digital sound improving, I resolved to design a turntable so far superior so as to give digital sound a high target to strive for,” said Mr. Nishikawa. “My objective was an analog turntable that would retrieve 100% of the information engraved in the grooves of a vinyl record.”

It has already been called “State of the Art” by American high-end audio magazine The Absolute Sound, and “in a class by itself” by noted high-end reviewer Mr Harry Pearson. 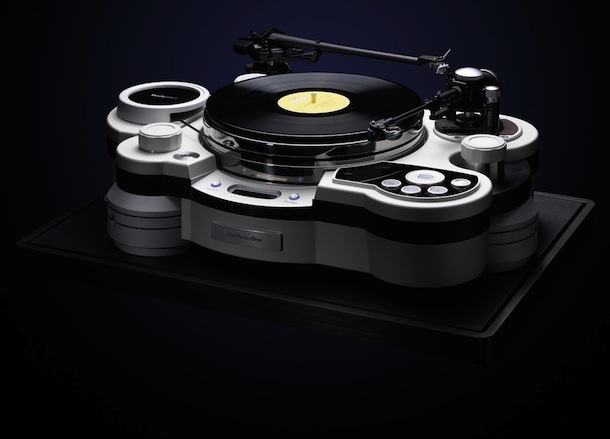 The TechDAS Air Force ONE features a massive 30kg two-part platter that incorporates both vacuum hold-down and an air bearing using silent, ripple-free air pumps. Two crystal-locked 50W power amplifiers and an AC synchronous motor ensure absolute speed stability that can be varied for pitch control. The chassis and superstructure is engineered to eliminate all internal vibrations and resonance and be immune to external vibrations. The result is an amazing level of signal to noise ratio and speed stability that used to be impossible in conventional turntables.

The TechDAS Air Force ONE will be demonstrated in The Venetian, Suite #29-119 and Suite #35-309 during the High Performance Audio Showcase at the International Consumer Electronics Show, January 8th – 11th, Las Vegas, Nevada.

About TechDAS
TechDAS is the house brand of Stella, Inc. the premier distributor of high-end audio products in Japan. It was built out of the passion and desire of the staff of Stella for products that elevate the enjoyment of music to an art-form.