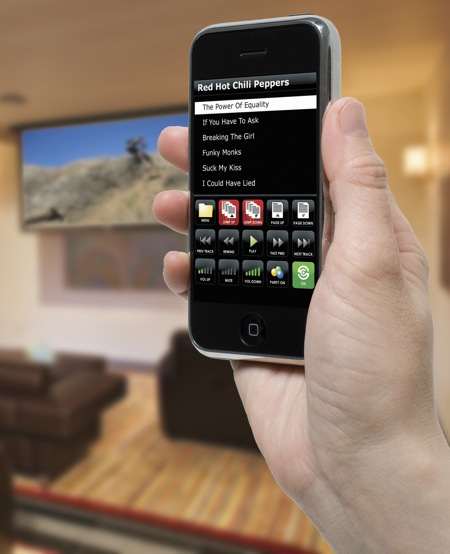 SpeakerCraft, America’s original manufacturer of in-wall speakers is pleased to announce the release of a new interface for its award-winning MODE multi-room A/V control system. It allows the Apple iPhone or iPod Touch to be used as a wireless remote with control of all sources and routing accessed on the touch screen through an intuitive GUI.

The system operates through the home’s wireless data network via a wired port on the user’s wireless router. “The connection is very easy to set up and there is little or no additional programming required by the installer,” says Jason Craze, SpeakerCraft’s Director of Engineering. “A person can literally walk through their front door, press a single virtual button on the iPhone touch screen and have access to all of their system’s control functions.”

“You can have an unlimited number of iPhones operating your system and even have two simultaneously operating in multiple zones,” said Jeremy Burkhardt, SpeakerCraft’s president. “This is an amazing mass market opportunity for the CEDIA channel.”

The colorful interface features large virtual buttons, making it easy to view and operate. iPhone users will find the interface shares the look and feel of other iPhone functions and therefore presents little or no learning curve.

The interface is generated through an embedded web server residing on a chip inside SpeakerCraft’s ERS 1.0 Ethernet to serial adapter. The interface is accessed through the iPhone’s Safari browser. This means there is no time wasted downloading or installing an application on the iPhone itself. The ERS also contains a version of the interface designed to display and operate on a standard PC or Mac. This offers the user the option to control the system from the iPhone/iTouch or any PC on the network.

“This is another powerful addition for SpeakerCraft dealers,” Burkhardt continued. “They will now be able to offer their customers the easiest systems to use in the industry. Our current relationship with Apple, which allows us to control and display metadata from the iPod, has already dramatically enhanced our control offering. This latest development, utilizing the Safari browser on the iPhone or iPod Touch to control the system, will expand SpeakerCraft’s control offering even further. I hate to say it, but this is the beginning of the end for keypads. Soon any keypad that isn’t emulated on a device like the iPhone will be obsolete.”

SpeakerCraft, established in 1976, devoted itself for more than a decade to the design and development of architectural loudspeakers and became known as the prime OEM for many well-known, in-wall speaker brands in the field. In marketing its own brand, now one of the widest lines of architectural speakers and electronics in the industry, SpeakerCraft brings with it years of experience and a dedication to dealer satisfaction.