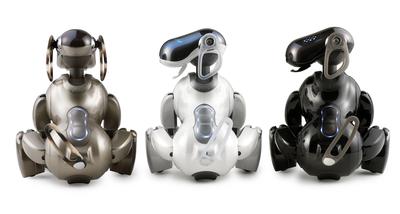 The software enhancement package enables AIBO to say more than 1,000 English words to communicate with its owner, in addition to recognizing many Spanish words and phrases for the first time. It now also has the ability for short term memory mapping and news reads through a version of web syndication– RSS (Really Simple Syndication) feeds.

A limited edition, champagne brown AIBO Entertainment Robot (ERS-7M3/T) will come with a camouflaged ear, along with a tail design that is unique to each unit. This sophisticated color expands on the current options of pearl white and pearl black.

The new software comes bundled with any of the new ERS-7M3 models in each of the three colors. For current AIBO owners, upgrade kits can be purchased for previous ERS-7 models.

The new software allows for increased pet-like actions and motions for a more natural body language. The mapping feature enables AIBO’s short term memory to track the locations of its Energy Station, faces, walls, and its favorite place or toys much faster. The entertainment robot can automatically detect the beat of the music and dance along, even to the owner’s favorite song.

A Power Packed Entertainment Package
The AIBO Entertainment Player version 2.0, part of the AIBO MIND 3 software, comes on a CD-ROM that easily loads onto a personal computer. Multiple features are incorporated into the updated software for increased functionality and an enhanced entertainment experience. Owners can monitor and manually control many of AIBO’s capabilities directly from their computer. The AIBO MIND Scope feature shows the owner objects that AIBO sees, shows its emotions and lets the owner know when it has recognized a person.

The AIBO Diary feature and the AIBO Net News are two more exciting additions to its capabilities.

“With one simple voice command AIBO can read the morning’s headline news while its owner folds the laundry,” said Toshi Kawai, senior manager of Entertainment Robot America (ERA), a division of Sony Electronics. The AIBO Net News reader capability enables the robot to read its owner news or weather from the owner’s choice of RSS feeds available on many popular websites. With the AIBO Diary, the entertainment robot can take pictures and add notes on its daily activities to its diary. The diary can be shared with friends and family by uploading entries directly to a blog site.