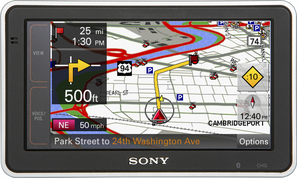 For drivers geared toward value, Sony Electronics is announcing that its new nav-u™ personal navigation devices (models NV-U73T and NV-U83T) are now available at retail and online stores for about $300 and $400, respectively.

These in-car portable systems contain navigation features that drivers have come to expect, such as text-to-speech voice commands and real-time- traffic capability. They also add new safety features, such as the super suction cup mounting system.

Sony’s new super suction cup comes with both models. It is easy to mount on the windshield or dashboard, providing a tight, stable attachment. Made with a flexible non-adhesive gel, it grips the rugged surface of the dashboard so the touch screen can be mounted closer for an easier reach.

Designed to stay put even in the most extreme temperatures, the super suction cup can also be easily removed and transferred to another vehicle.

Bluetooth Hands-Free Phone Calls
The top-end NV-U83T model adds another safety feature-Bluetooth technology-for making hands-free phone calls. With a built-in microphone, drivers can use voice commands to initiate calls via compatible Bluetooth- enabled cell phones. The nav-u system connects automatically so drivers can keep their hands on the steering wheel and their eyes on the road.

With anti-glare coating, it is easy to see the screen in any lighting condition. With its high resolution, the device maintains a clear image even when the screen is split into two images.

This unique dual view feature helps drivers navigate visually so they don’t have to rely solely on street signs. It zooms in and shows certain landmarks to help drivers make the correct turns at the right time. On the highway, dual view shows a 3D rendition of approaching intersections with lane guide information to let drivers know exactly where they need to turn if necessary.

Low GPS Signal … No Problem
When the GPS signal is weak, the nav-u device will still be able to keep drivers headed in the right direction. Another unique feature, called POSITION Plus™, provides constant, more accurate positioning and interruption-free guidance. In addition to the SiRF Star III GPS chip, POSITION Plus includes pressure, gyro and acceleration sensors. The device uses these additional sensors to calibrate where drivers are so they can safely plan ahead and not miss turns coming out of tunnels or from in-between tall buildings.

Touch Screen Shortcuts
Gesture command, another unique new Sony function, lets drivers jump to commands with one touch on the display, eliminating the need to dig down on the menu. If drivers want to go home, they just draw a roof (or inverted “V”) and the destination becomes home. Other gesture commands include zoom in or out, call home and two user-customized destinations.

The nav-u device is the first Sony portable navigation system to show brand icons for restaurants, hotels, gas stations and stores. In addition to proactively selecting a point of interest, drivers will automatically see brand icons appear on the map so it’s fast and easy to find favorite locations while driving in unfamiliar cities.

Text to Speech
Ready to use right out of the box, both nav-u devices help drivers map a destination, locate points of interest and find home again. Both models come with text-to-speech technology, which enables the voice prompts to actually say the name of the street or highway. A powerful speaker ensures that voice prompts are clear and audible.

About as wide as a deck of cards, the new devices have a thin, portable design. They also come with a Memory Stick Pro Duo slot for future expansion capabilities.

Availability
The nav-u portable navigation devices are available at www.sonystyle.com, at Sony Style retail stores nationwide, at military base exchanges, and at authorized dealers around the country. For more information about the products, please visit www.sonystyle.com/navu.