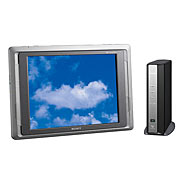 SAN DIEGO – Bridging two powerful applications to extend portable entertainment, Sony Electronics announced today that one of the products that will support the LocationFree line of products is the PSP (PlayStation Portable) devices, which can now access home audio/video content via the LocationFree Base Station (when upgraded with the Firmware 2.5 update).

Currently, customers of LocationFree products can access their entertainment wirelessly at home or over the broadband internet while on-the-go, either from their LocationFree TV monitor or from notebook PC’s loaded with LocationFree Player software. Now, by upgrading to firmware version 2.5, PSP system enthusiasts can also watch their favorite TV programming, DVDs or PVR content via Wi-Fi hot spots with broadband access found in hotels, airports and other locations.

“We know that the world of entertainment is no longer bound by the walls of the living room and that people want content when and wherever they may be,” said Randy Waynick, senior vice president for Sony Electronics. “LocationFree and the PSP system together bring to life the ultimate portable entertainment center making location almost as obsolete as time.”

“The PSP system has elevated portable entertainment, giving users the freedom to play full 3D games, watch movies, listen to music, browse the Internet, and now view their TV programming from any Wi-Fi hot spot,” added John Koller, senior product marketing manager, Sony Computer Entertainment America. “More than ever, today’s consumers are looking to access their entertainment when and where they’d want, and LocationFree and the PSP system offer an ideal way to access that TV programming without compromising quality.”

At home, the LocationFree Base Station connects to a variety of audio visual devices, such as a set top TV tuner, DVD player and personal video recorder (PVR). The 12-inch LocationFree TV (LF-X11) monitor can access the base station so you can watch your favorite TV programming, DVDs or PVR content wirelessly in home and over the Internet while on the road with availability of broadband connection. Expanding functionality, Sony’s new LocationFree Player Pak (LF-PK1), includes a base station and software, which allows PC users to enjoy the benefits of LocationFree TV.

The second generation LocationFree system simplifies operation and installation with an easy, worry-free on-screen set-up guide. The products also integrate a dynamic DNS service so there is no longer any need to use external dynamic DNS providers. This makes the setup process less complicated.

Among other upgrades, the free Firmware 2.5 upgrade for the PSP system provides access to the LocationFree application. It can be wirelessly downloaded directly to a PSP system using a Wi-Fi connection or downloaded to a PC from us.playstation.com/psp and transferred to a PSP through a USB cable.