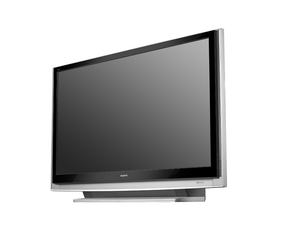 “Thanks to outstanding picture quality and overall performance, the response to our SXRD Grand WEGA TVs has been nothing short of phenomenal” said Randy Waynick, senior vice president of the Home Products Division for Sony Electronics. “We expect the new line-up to keep up the positive momentum by offering greater flexibility, deeper features and incredible picture quality.”

Working with Sony’s Cinema Black Pro mode, the sets deliver up to 10,000:1 contrast based on overall light levels of the original signal.

The new models are digital cable-ready with an integrated CableCARD slot and TV Guide on screen program guide. Other features include two HDMI inputs with 1080p capability, front HDMI HDV camcorder connection, and a PC input. The XBR models feature side speakers, which are removable on the KDS-R70XBR2 model.

Offering 60-, 55- and 50-inch models, Sony’s new A2000 line delivers outstanding SXRD picture quality and a new compact, bottom speaker cabinet design. The KDS-60A2000, KDS-55A2000 and KDS-50A2000 models feature the WEGA Engine system and the same 0.61-inch SXRD chips found in the XBR line, as well as such picture technologies as Cinema Black Pro that delivers a contrast of up to 10,000:1 based on overall light levels of the original source. The line also offers two HDMI inputs with 1080p capability and a front component input for HDV camcorder and PC input.

All models will be available through sonystyle.com, at Sony Style retail stores (www.sonystyle.com/retail) and at authorized dealers nationwide. More information on the new line can be found by visiting www.sony.com/2006TV