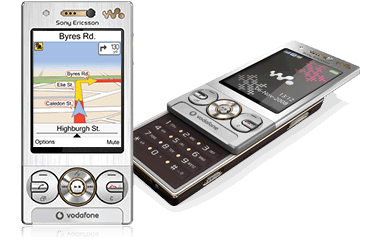 A new sliding Walkman mobile phone has been launched as a network exclusive by Vodafone in the UK, the Sony Ericsson W715 is the latest in a long line of music orientated phones but this new model incorporates some new technology not found previously in the range.

The Sony W715 has been released alongside the Sony Ericsson W705, to look at there are not many differences to pick out with the naked eye but on closer inspection there are some different features in each phone. The Sony Ericsson W715 incorporates aGPS for directions on the move using the Vodafone Find and Go service.

These Walkman models both offer different built-in sensors, the Sony W705 opts for an accelerometer which turns the screen to whichever way up you hold the phone whilst the Sony Ericsson W705 incorporates Gesture Control, a sensor that reacts to the users hand above the phone to control certain features like music play.

The Sony Ericsson W715 will only be available in one colour scheme – Luxury Silver, whereas the W705 will boast up to three colours including a Red edition.

The overall dimensions of both phones mirror each other exactly as does the weight at just 98g, the Sony W705 lacks a full web browser so the W715 scores a point there but the W705 gains it back by including animated screensavers not found in its competitor.

Both of these new Walkman phones are the first ever to feature integrated WiFi technology, this is great news for fans of these music devices as they no longer have to download their music tracks by hooking up to a PC, if there’s a WiFi signal about they can do whilst sitting on the bus, walking down the street or from the comfort of another room with a wireless router.

If you are a music freak, then the Sony W715 is the ideal mobile phone for you. The W705 is the latest Walkman phone that comes with a clear bass and the stereo and good quality headphone for crystal clear sound. It is an entertainment box and can compete well with the W980 in respect of the sound quality. But it is a unique phone that has created a flutter in the market.

The phone is a piece of craft in itself. It is a slider phone crafted in aluminum with delicate touches of gold on it. W715 is available in two colors – passionate red and luxury silver. It also looks compact and with a dimension of 95 x 47.5 x 14.3 mm and weighs just 98 grams.

The Phone at a Glance

This phone is a culmination of premium design integrated with top-class sound quality and super-fast connectivity to digital content. Listening to Sony Ericsson W715 is a pleasant experience and music sounds real on it. It has also a Desktop direct search option to play music and videos online from the YouTube. For superfast connectivity it is integrated with Wi-Fi and a large 2.4 inch screen of high resolution (240 x 320 pixels) to view web pages without any difficulty. The phone doesn’t have a GPRS service but the EDGE and the 3G feature makes up for it.

The phone also has a 3.2 megapixel camera and Bluetooth to share pictures. The camera has a flash that even helps you to take pictures in the night and also has a secondary videocall camera for video conferencing. Google maps will help you to find your way and the FM is fitted with TrackID for clear signals. It has a giant memory of 4GB memory card and that can store around 4000 songs.

The W715 has been designed specifically for music lovers and range of audio software in it makes listening music a memorable experience. It has a special arena called the PlayNow arena, which has a wide range of entertainment. The Shake control switch helps to change tracks and the volume level by flipping the wrist. The SensMe function helps the user to create playlists on the basis of the mood and not on artists or genre. The player if of the latest Walkman 3.0 player and can play all MP3/AAC/MPEG4 files.

The phone is still a new kid on the block but has made a splash among the music lovers with its special features. The Shake control and SensMe are much needed for the Walkman series and the internal memory capacity 120 MB that can be expanded through the M2 card slot adds value to it. This high-end slider phone is the first dedicated phone for music a lover that comes with a Wi-Fi. With its unconventional design and look the phone is a rock star and also a utility product for net savvy music lovers

The Sony Ericsson W715 is a Vodafone exclusive mobile phone, the network and manufacturer have signed an agreement allowing Vodafone to retail this handset solely on their network for a limited time frame after which other networks will be able to sell this new phone.

In this particular case it doesn’t matter too much as the Sony Ericsson W705 is already available on other networks such as O2, Orange and T-Mobile – Unless a user is hell bent on getting the exact specification of the Sony W715 then the W705 is available to them away from Vodafone.

It is expected that the network will also release this sassy little sliding Walkman phone on Pay As You Go in the near future to bolster sales over the limited time exclusive period.