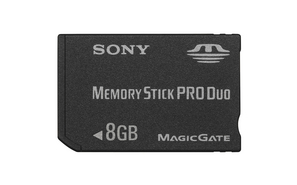 Beginning this year, a Memory Stick slot will also be standard on all new 2007 HandycamA camcorder models.

“The life of the Memory Stick format spans from the dawning of the digital camera to the emergence of today’s high-definition video and gaming products,” said Mike Kahn, senior manager for Memory Stick Media at Sony Electronics. “Throughout all of these advances in the consumer electronics industry, Memory Stick media has remained a constant source of compact and portable flash memory.”

According to Kahn, the 8GB MSX-M8GS Memory Stick model will store approximately 1,500 images in 10-megapixel, fine mode; more than 18 hours of video at 768Kb per seconds in MPEG4 compression; and can hold a collection about 2,000 songs in the MP3 format at 128 kbps with an average of four minutes per song.

For versatility, Sony Memory Stick Duo media cards are sold with an adapter for devices with a standard-size Memory Stick media slot. Kahn said they also offer the highest durability in the flash media marketplace with a standard operating temperature range of -13 F to +185 F.

The 8GB Memory Stick PRO Duo media card will be available in February for about $300 at sonystyle.com, at Sony Style retail stores, and authorized dealers nationwide.