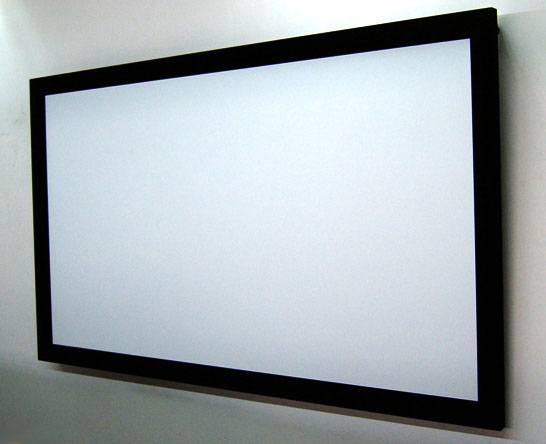 The innovation of EN4K brings the Screen Excellence line to four distinct AT screen formulations, making it the widest selection of acoustically transparent projection screen fabrics on the market today.

The Reason for Acoustic Transparency
According to Dolby, DTS and THX, the front Left, Center, and Right loudspeakers, as well as the subwoofer(s), in a commercial cinema should be placed behind the screen. The three main channels should also be at the same height. All commercial cinemas use this architecture, and have for the past 70 years.

Technical issues with digital video projection have restrained the use of acoustically transparent screens in home theaters until recently. Solid vinyl screens require positioning speakers around the screen, causing a breakdown in the “suspension of disbelief” so highly sought after by cinema enthusiasts. So-called acoustically transparent perforated vinyl screens tend to cause audio and video problems such as video resolution loss, moire interaction between the grid of digital pixels and the fixed grid of holes in the screen, as well as pronounced audio high frequency loss and comb filtering.

With the new generation of Screen Excellence acoustically transparent (AT) woven fabric projection screens, the challenge of front speakers behind the screen in residential theaters has now been elegantly met for all of the popular hi-def projector resolutions (780, 1080 or commercial D-Cinema 4K). Screen Excellence AT screens create the most realistic cinematic experience possible by matching the sound with action on the screen, as intended by the movie’s director. This is much more effective than the old fashioned way of placing speakers around the screen where even the finest loudspeakers are compromised. Not only is the sound better and more coherent, but the theater also looks more elegant aesthetically.

Screen Excellence has spent two years in the development of this groundbreaking woven projection fabric, which brings to videophiles and audiophiles the ultimate solution to providing a lifelike experience in home theaters.

Installation of the fabric is quick and simple. The material is washable and requires no maintenance other than a once a year brush with a clean fabric brush, or vacuum brush attachment.

StJohn Group’s sales director, John Caldwell, summarized, “The introduction of EN4K represents a true milestone for the Screen Excellence brand. StJohn Group and its growing base of specialty residential and commercial dealers have been at the forefront of the acoustically transparent screen market since 2003. But Screen Excellence’s new EN4K material puts our dealers and their performance driven clients well beyond anything on the market.

“Specialty dealers who appreciate the need for reconciling both the audio and video performance of their client’s theaters will benefit most by EN4K. With the smaller pixel structure of 4K projection, losing pixels though perforated holes or having them be altered by a bumpy surface wasn’t an option. 4K projection, while years away from residential use, represents a daunting engineering challenge that we can answer today.

“While the current rollout of commercial D-Cinema was our initial impetus, there is every reason to believe that our dealers will also employ EN4K for their residential 1080 and 720 based clients who simply want the finest experience possible.”

Behind this rich heritage is Patrice Congard, founder and CEO of Screen Excellence. Mr. Congard is the originator of the modern acoustically transparent screen and is a leading innovator of the technology. His entire career has been focused on delivering superb engineering solutions to a variety of professional and consumer audio projects. The development of acoustically transparent screens is the natural solution he envisioned after providing loudspeaker systems that had to be accommodated around screens — not in their natural position, which, as in commercial applications, he believes to be behind the screen.