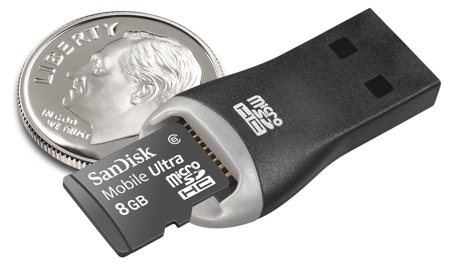 A must-have product for consumers who embody the digital lifestyle, the SanDisk Mobile Ultra high-performance cards are “best of breed” premium cards that provide fast side-loading speeds. This means that users will experience accelerated transfer rates of digital files to and from their mobile memory card and their computer. In addition to speed, SanDisk Mobile Ultra cards allow consumers to “wake up” the multimedia features of mobile phones by increasing the phone’s storage capacity for maps, music, videos, photos, games and other essential applications. For avid mobile phone videographers, events and experiences captured by the phone’s video camera can be quickly and efficiently transferred to social media or video-sharing websites. For added value and convenience, the card is bundled with a MobileMate™ Micro Reader that plugs directly into a USB 2.0 port to assist in this quick transport and easy management of digital content.

Advertisement. Scroll to continue reading.
With 8GB* of digital storage, for example, consumers will be able to store 1,000 songs, 1,200 photos and 21 hours of video – more than enough storage to drive from San Francisco to New York City without hearing the same song twice, fill six photo albums with images and watch both Star Wars trilogies and the Matrix trilogy.

The microSD cards are engineered for slot-equipped legacy mobile phones and can hold a maximum capacity of 2GB*. The microSDHC cards, available in 4GB and 8GB*, are ideal for newer mobile phone models, most of which are compatible with these higher capacity cards. The Memory Stick Micro M2 cards are designed for Sony Ericsson’s new generation of mobile phones, all of which are compatible with the 2GB, 4GB and 8GB* capacity levels. SanDisk Mobile Ultra cards come with a 10-year limited warranty.

About SanDisk
SanDisk Corporation, the inventor and world’s largest supplier of flash storage cards, is a global leader in flash memory — from research, manufacturing, and product design, to consumer branding and retail distribution. SanDisk’s product portfolio includes flash memory cards for mobile phones, digital cameras, and camcorders; digital audio/video players; USB flash drives for consumers and the enterprise; embedded memory for mobile devices; and solid state drives for computers. SanDisk (www.sandisk.com/corporate) is a Silicon Valley-based S&P 500 company, with more than half its sales outside the United States.

AndroidGuys8 years ago
You Are Here