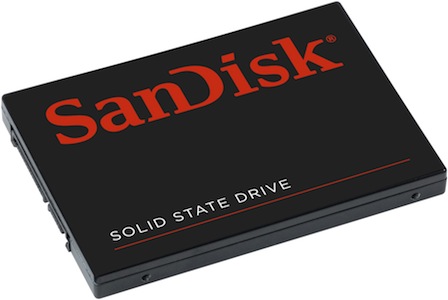 Opens Files up to Twice as Fast and is More Rugged Compared to a 7,200 RPM Hard Disk Drive

SanDisk today announced that it has begun shipping its SanDisk G3 Solid State Drives (SSD) to retailers in North America and Europe. The flash memory-based SanDisk G3 SSD offers a compelling alternative to a 7,200 RPM Hard Disk Drive (HDD) for many customers — including do-it-yourself enthusiasts, IT managers or anyone seeking increased durability and performance with high reliability.

“Our rugged drive enables a superior customer experience by delivering extended endurance and fast performance in a resilient SSD design,” said Eric Bone, vice president, retail product marketing, SanDisk. “SanDisk believes in an uncompromising development approach which insists that an SSD’s long term reliability and durability are just as important as its overall speed. We’re leveraging our long history of flash memory and retail expertise to bring the SanDisk G3 SSD to market.”

SanDisk G3 SSD is Microsoft Windows 7 certified and is compatible with Apple Mac OS X Snow Leopard as well as Windows XP, Windows Vista and Linux. The drive also supports the newest Windows 7 TRIM feature, which contributes to a substantial gain in the SanDisk G3 SSD’s performance by allowing the drive to continuously manage its resources and retain optimized performance throughout its lifespan.

SanDisk G3 SSD is available now at sandisk.com via the U.S. and UK e-commerce sites in 60GB and 120GB capacities with prices of $229.99 and $399.99 respectively. The drive will be available at retailers in North America and Europe soon, with exact pricing to be set by retailers.