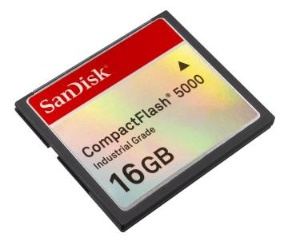 SanDisk Corporation (NASDAQ:SNDK) today announced it is doubling the capacity of its CompactFlash 5000 flash memory cards for industrial markets. In addition to fast read and write speeds, the cards provide a high level of durability and reliability for mission-critical applications such as industrial PCs, medical instruments, military applications, point-of-sale (POS) equipment and gaming machines.

The new 16-gigabyte(1) (GB) high-performance CompactFlash 5000 card was unveiled at CeBIT 2008, one of the world’s largest technology trade fairs, where it is on display at Booth D59 in Hall 26 of the Hannover exhibition center.

With twice the capacity of its 8GB CompactFlash introduced last spring, SanDisk’s 16GB flash card uses binary memory, designed by SanDisk specifically for mass storage applications, to achieve a sustained read and write performance of up to 30 megabytes (MB) per second(2). It supports a transfer mode of up to UDMA 4, an industry standard that enables high data transfer rates and includes performance boosters and on-the-fly error detection.

“There’s a substantial market for this type of industrial-strength card in mission-critical applications, especially those in harsh environments,” said Scott Deutsch, vice president of OEM sales and marketing for SanDisk. “In addition to providing high-performance and high-capacity, the CompactFlash 5000 is a mass storage solution that can be trusted to meet the demands of industrial users and applications.”

The 16GB CompactFlash 5000 uses SanDisk’s patented flash management technology — such as back block management, error detection and error correction code (EDC/ECC) — to provide data reliability, even in extreme temperatures that can range from -13 degrees to 185 degrees Fahrenheit (-25 to +85 Celsius). It is available in fixed or removable configurations.

In addition to the mass storage-specific flash memory chips, CompactFlash 5000 includes an intelligent controller that provides a high-level interface to the host computer. This controller manages data storage and retrieval, defect handling and diagnostics, power management and clock control.

SanDisk Corporation, the inventor and world’s largest supplier of flash storage cards, is a global leader in flash memory — from research, manufacturing and product design to consumer branding and retail distribution. SanDisk’s product portfolio includes flash memory cards for mobile phones, digital cameras and camcorders; digital audio/video players; USB flash drives for consumers and the enterprise; embedded memory for mobile devices; and solid state drives for computers. SanDisk is a Silicon Valley-based S&P 500 company, with more than half its sales outside the United States.

AndroidGuys11 years ago
You Are Here