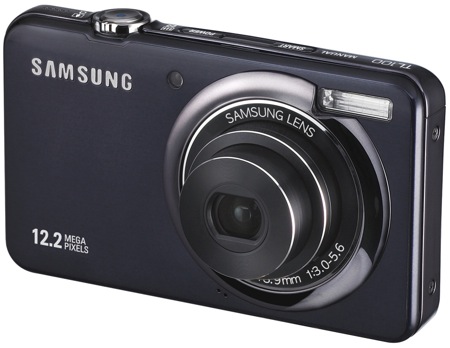 Samsung Electronics America, Inc. announced the TL100, a remarkably slim and easy-to-use 12.2 mega-pixel point-and-shoot digital camera. Measuring just 16.6mm thick (excluding the lens), the TL100 is the ultimate pocket-sized solution for the on-the-go consumer in search of a digital camera that won’t weigh them down. Encased in eye-catching, brushed stainless steel, the ultra-slim TL100 manages to pack a large 2.7 inch LCD screen for framing shots and reviewing images and video, as well as a high-quality Samsung lens, offering a 3x optical zoom.

The TL100 is highlighted by Samsung’s new Smart Auto feature, which takes ease-of-use to a new level, underscoring what it truly means to be a point-and-shoot digital camera. When engaged, Smart Auto will automatically select one of the TL100’s 11 scene modes which best suits the environment the user may be shooting in. For example, the TL100’s Smart Auto feature will automatically set the camera to its Landscape scene mode if the user is taking an image of a mountain range, and then switch gears and automatically select the Portrait scene mode if the user proceeds to take an image of an individual. No manual interaction is required.

In addition to Smart Auto, the TL100 also incorporates Samsung’s proprietary Smart Album program. Smart Album is useful tool which allows users to search through the various files they have saved on their memory card for a specific image. Smart Album automatically organizes the user’s digital images and gives them the ability to narrow their search based on the date or month the image was taken, the file type, whether it’s a photo, video, or voice memo, and the overall color tone. 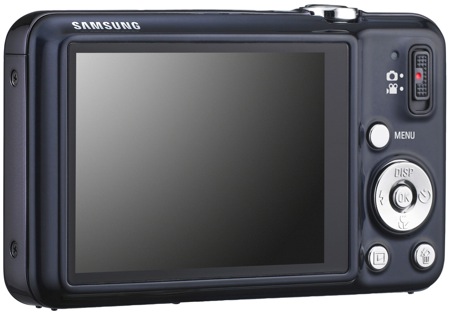 “The TL100 exemplifies style and simplicity,” said Tony Sorice, vice president of Sales and Marketing for Digital Imaging, at Samsung Electronics America. “This is an attention grabbing digital camera, not only because of its brushed stainless steel body and slim profile, but because of the advanced features that it brings to the user’s fingertips, which make taking a digital photograph easier than ever.”

The TL100 also offers consumers Face Detection, Smile Shot, Blink Detection, and Beauty Shot technology, all engineered to help improve results and enhance one’s images. Face Detection automatically recognizes up to nine faces in a frame and adjusts camera settings to maximize image quality, while Smile Shot will only allow an image to be taken if the TL100 recognizes a smile. Blink Detection is a useful feature that will improve a user’s ability to capture a photo with everyone’s eyes open. When Blink Detection is selected, the TL100 will automatically take two successive shots when the shutter button is fully pressed, and if the camera detects that a subject’s eyes are closed, a third shot will be fired. The TL100’s Beauty Shot mode is a unique option that will automatically retouch imperfections on a subject’s face, such as blemishes and dark spots, to help improve and even out skin tones. The level of retouching is also selectable by the shooter allowing them to control how much editing will be applied to image.

For added stability and blur-free images, Samsung has incorporated Digital Image Stabilization (DIS) technology into the TL100, a useful feature that helps reduce the blur found in images as a result of vibrations, hand shake or other unexpected movements at the moment of image capture.

Users can also record video with the new TL100. Featuring MPEG-4 video recording, consumers can capture video at a maximum resolution of 800×592 (SVGA) at 20fps and utilize the camera’s 3x optical zoom for added versatility. The TL100 also features useful in-camera editing controls, which allows users to pause, and then resume filming of video clips without having to save each clip as an individual file.