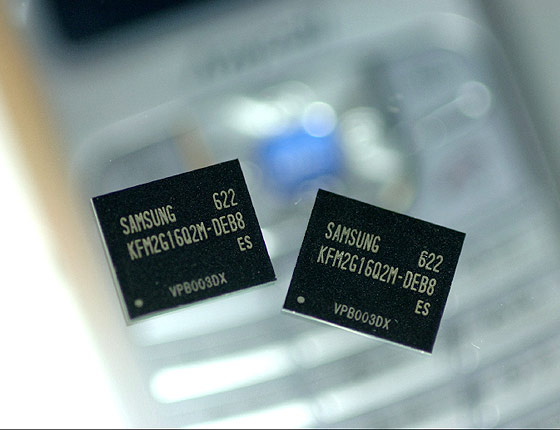 Samsung Electronics Co., Ltd., the leader in advanced semiconductor technology, today announced that it produced 117 million units in 512 megabit (Mb) equivalent of its OneNAND™ Flash fusion memory in 2006, a 130 percent increase in production volume from 2005.

The popular device is the first fusion memory chip, a device that fuses a single-level-cell NAND core with SRAM and logic elements to emulate a NOR Flash interface. First targeted at the handset market, OneNAND has also been specified in a wide range of embedded applications including digital still cameras, hybrid hard drives and set-top boxes for HDTV.

OneNAND provides a maximum ‘read’ speed of 108Megabyte/s, four times faster than conventional NAND Flash memory, and a ‘write’ speed of up to 17 MByte/s, 34 times faster than multi-level-cell NOR Flash memory. OneNAND can store up to 500 sequential photographs from a five-megapixel camera phone without any click-to-click delay between images. It can also improve booting speed of mobile phones by as much as 20 percent.

Three of the top five wireless equipment manufacturers in the world use OneNAND in volume production for highly converged handsets. OneNAND now is being specified in more than 120 mobile designs.

OneNAND uses up to 60 percent less energy than competing NOR memory and is available in densities from 256Megabit to 2Gigabits. It supports virtually all popular mobile operating systems, including Windows Mobile(CE) 5.0, Symbian and Linux, and various RTOS architectures.