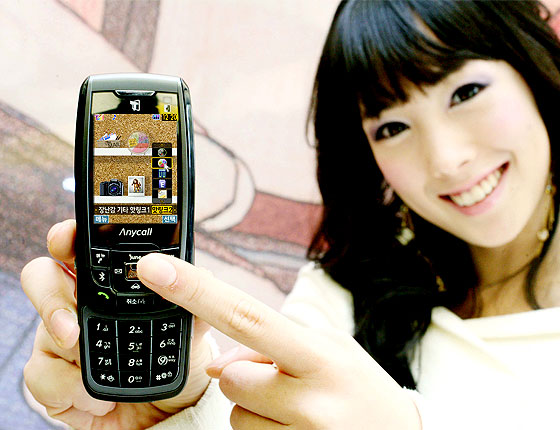 Samsung’s latest ‘Optical Joystick’ Phone (Model: SCH-V960 ) is suited with the latest technology that may revolutionize the way users interact with the menu and user interface of mobile handsets. Users utilize the optical joystick key by placing their finger and moving a cursor to navigate through the menu, similar to a cursor of a mouse on a PC.

Optical sensors will read and react to users’ finger movement, thus breaking down the traditional four-way menu navigation and providing 360 degrees of freedom. The familiarity and free movement of the V960’s Optical Joystick will result in quick and hassle-free menu navigation.

Users can point the cursor and click directly on icons on MyScreen, similar interface to that on a PC environment, and gain direct access to frequently used menus such as photo album, messaging, and music menu. Users can also use the Optical Joystick to easily scroll through the play list while listening to their music.

Through an illumination sensor, the Samsung V960 also includes a ‘Smart Lighting’ feature that automatically controls the brightness of the LCD screen and keypad. By using the ‘Smart Lighting’ feature, users are protected from eye strain and will minimize power consumption for increased efficiency. In addition, the V960 also supports a 2 megapixel camera, GPS and Bluetooth function.

Kitae Lee, P resident of Samsung’s Telecommunication and Network Business said, “As the importance of user-friendly interface increases, Samsung is researching and developing methods that enhances intuitive use of mobile phones. Samsung will continue to combine innovative idea and the latest technology that will benefit our end users.”

The V960 will be launched in the Korean market at the end of December.