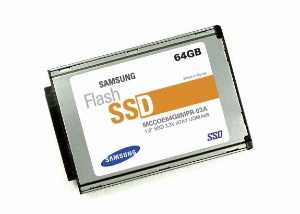 The 64GB SSD consists of 64 eight Gigabit (Gb) single-level cell flash memory chips. Use of 51nm process technology permits fabrication of much smaller components, with each chip having circuitry 1/2500th the width of a human hair.

Samsung is aggressively expanding market development efforts for its SSDs. Industry wide attention on ultra-light, ultra-slim notebook PCs with flash memory based SSDs reflect early market support for this new storage medium. In addition, Samsung has already introduced 32GB SSDs into ultra-mobile personal computers (UMPCs). SSDs also are being considered for server applications such as in advertising and for Web search engines. Other digital consumer products such as camcorders, PDAs and printers can now be equipped with SSDs ranging from 4GB to 64GB.

Samsung’s mass production of 64GB SSDs makes it the largest producer of high-capacity SSDs in the world.

Rapid expansion of the 1.8-inch SSD market will spark demand for even smaller SSD formats to be used in mobile consumer electronics. The miniaturization of SSDs will give rise to new types of digital products. Over the next three years, 2.5-inch and 3.5-inch SSDs will also gain a great deal of momentum for widespread use in standard notebooks and desktop PCs, respectively.

Samsung expects that sales of SSD units will increase at a rapid 270 percent pace industry-wide between now and 2010 to become the largest growth segment in the NAND flash industry.