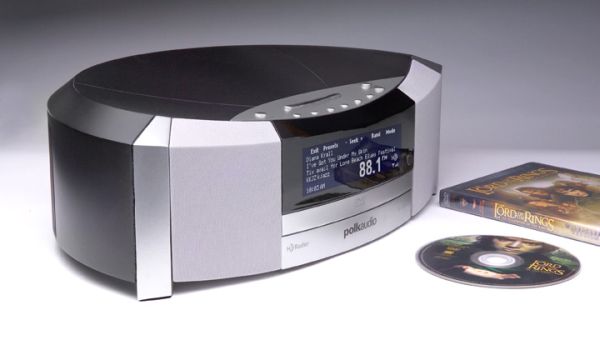 April 28, 2005 — Home Entertainment Show — New York, NY –Today audio manufacturer Polk Audio announced the introduction of their I-Sonic entertainment system, a compact, easy to use stereo, all-digital audio system that includes an AM/FM and digital HD Radio tuner, a DVD/CD player and XM Satellite Radio capability. Exclusive I-Sonic and Power Port technologies produce sound quality so big and lifelike that for many, the I-Sonic is capable of being the primary home entertainment system.

The Polk Audio I-Sonic entertainment system measures only 14.5″ x 9.75″ x 4.75″, making it the perfect system to use on a kitchen countertop, on a nightstand, in a TV stand or on the coffee table in a living room. The I-Sonic can be used in homes, offices and small businesses to deliver rich, room filling 360-degree stereo sound that rivals or betters that of much larger and costlier audio systems. The I-Sonic entertainment system will be available in September 2005 for $599.

HD Radio is digital radio technology that offers static-free, crystal-clear reception with CD-quality sound from FM stations and the richness of FM-analog stereo sound quality from AM stations. HD Radio also allows the ability to multicast program streams over a single FM frequency (e.g. 97.7-1, 97.7-2, etc.) so that broadcasters can offer additional content to serve multiple audiences. A variety of data services that range from text-based information — artist name, weather alerts, school closings, traffic alerts, etc. — can be scrolled across the receiver display. In addition to receiving standard analog AM and FM broadcasts, the Polk Audio I-Sonic entertainment system incorporates all the digital HD Radio features listed above. 2500 AM and FM stations nationwide have begun rolling out digital HD Radio technology.

“We are excited to be among the first to deliver an HD Radio product,” said Polk Audio Chairman and co-founder Matthew Polk. “We believe consumers will embrace HD Radio’s superior sound quality, new content choices through multicasting and rich data services. HD Radio combined with satellite radio ushers in a new Golden Age for radio broadcasting. We’re also thrilled to bring to market a truly high performance home entertainment solution to serve consumers for whom traditional audio systems are too costly, large and hard to use. The I-Sonic entertainment system marks the first time that HD Radio technology has been combined with advanced audio technologies to produce a truly high performance complete home entertainment solution.”

Polk Audio’s I-Sonic entertainment system is also the first product of its type to incorporate a DVD player. When connected to a TV or monitor, it is a complete, compact, high performance audio/video entertainment system. The single disc DVD player plays DVD video discs, CDs, Picture CD, Video CD, MP3 CD and many other formats. It features S-Video and composite video outputs to facilitate hookup to video displays.

The I-Sonic entertainment system becomes an XM Satellite Radio receiver with the addition of an XM Connect & Play Antenna (a $49 item) and monthly subscription. XM Satellite Radio is the nation’s leading satellite radio provider with well over 3.7 million subscribers and provides listeners with 150 digital channels, including 100% commercial-free music, over 30 channels of news, sports, talk and entertainment, and over 20 dedicated channels of XM Instant Traffic. All XM metadata is displayed on the I-Sonic’s front panel display, including full song title and artist name as well as information extras such as stock and sports score tickers.

The Polk Audio I-Sonic is simply the best sounding and most advanced compact home entertainment system. Powerful I-Sonic technology delivers a rich, room-filling stereo soundstage 360&#186 around the entertainment center. Listeners will enjoy a big-life-like stereo image wherever they are in the room. Patented Power Port venting technology belts out the kind of rich powerful bass you’d expect from much larger stereo speakers.

Mr. Polk continued, “We have worked hard to deliver a product consistent with the premium performance our customers have come to expect from Polk Audio. Products with similar form factors have been out for some time but customers with a discriminating taste for audio performance would generally not consider them. With the arrival of HD radio technology and the breakthroughs we were able to make in the audio delivery system, the I-Sonic system is capable of delighting everyone from casual radio listeners to serious audiophiles for a myriad of uses”

Two sets of auxiliary inputs allow hook up of any stereo audio device such as an iPod or other portable MP3 player or cassette deck. The I-Sonic entertainment system is also a full function dual-alarm clock radio that can use the radio or DVD/CD player as the alarm. It also features a headphone jack for private listening at any hour, 30 radio presets and a wireless remote control. On-product controls and an on-display menu system allow the unit to be used should the remote be lost or disabled.

To Download High Resolution Images go to:
http://www.polkaudio.com/home/partners/press/showimages.php?list=Home/I-Sonic
Click a thumbnail photo to display a large 300dpi image to save to your PC

About Polk Audio
Polk Audio is an international manufacturer of premium home and car audio products, with headquarters in Baltimore, Maryland. Founded by Matthew Polk and George Klopfer in 1972, Polk Audio holds over 50 patents for advances in loudspeaker design and technology. Polk products are distributed the US and Canada and in over 50 countries. Consumers can reach Polk Audio by phone (800) 377-7655, by email polkcs@polkaudio.com and on the web www.polkaudio.com.

XM, the leader in satellite-delivered entertainment and data services for the automobile market through partnerships with General Motors, Honda, Toyota, Hyundai, Nissan and Volkswagen/Audi, is available in more than 120 different vehicle models for 2005. XM also is available in Avis, National, and Alamo rental cars. XM is the exclusive in-flight entertainment service for AirTran Airways, and will soon be available on JetBlue flights. Consumers can experience XM over the Internet through XM Radio Online at http://listen.xmradio.com. For more information about XM hardware, programming and partnerships, please visit http://www.xmradio.com.