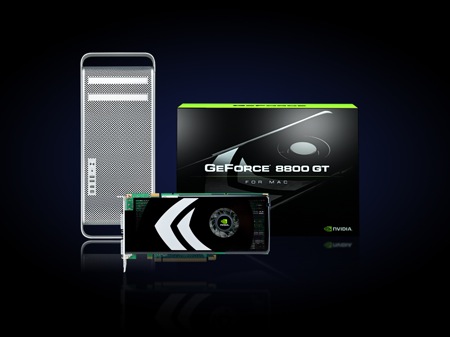 “The computer is more visual than ever, and Mac users in particular demand an exceptional visual experience,” said Ujesh Desai, general manager of GeForce desktop GPU business at NVIDIA. “Adding a GeForce 8800 GT to the first-generation Mac Pro system will deliver a major graphics boost, resulting in faster processing for a complete range of visual computing applications.”

North American customers can purchase the NVIDIA GeForce 8800 GT upgrade kit online from NVIDIA (http://www.store.nvidia.com) or The Apple Store (http://www.apple.com) for $279. Consumers outside of the US, Puerto Rico, and Canada should order from The Apple Store.

About NVIDIA
NVIDIA is the world leader in visual computing technologies and the inventor of the GPU, a high-performance processor which generates breathtaking, interactive graphics on workstations, personal computers, game consoles, and mobile devices. NVIDIA serves the entertainment and consumer market with its GeForce graphics products, the professional design and visualization market with its Quadro graphics products, and the high- performance computing market with its Tesla™ computing solutions products. NVIDIA is headquartered in Santa Clara, Calif. and has offices throughout Asia, Europe, and the Americas.