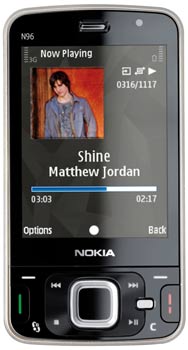 Nokia’s N-Series range of high specification mobile phones has gined increased exposure recently all due to the release of the manufacturers most sophisticated handset to date, the Nokia N96 has experienced one of the fastest network rollouts ever seen in the mobile phones market.

Currently, this new model has been picked up by all of hte major network operators in the UK, all within seven days of each other, this is testament to the consumer demand for the new Nokia N96.

A new colour variant of this high-tech handset has now been added to the N-Series range to compliment the original black edition, the new Nokia N96 Quartz takes its name from the colour of the exterior casing. The features, design and technology of the device remain exactly the same as in the black version, however the Quartz Nokia N96 swaps the black casing for a new silvery finish.

Although a small alteration, the enormous popularity of this handset means that both models will be in high demand, for those consumers wanting to stand out in a crowd there is the Quartz edition, whereas consumers wanting a state of the art mobile phone that looks the part can opt for the black version.

Featuring the same unique dual slide design of the previous N95 and N95 8GB Black models, the Nokia N96 is presented in a sleek black casing and boasts an impressive 2.8″, 16 million colour screen. Slide the base one way to reveal the media playback controls, whilst sliding it the other way allows the user to access the numeric keypad. It measures up in much the same way as the previous models in the N-Series, with dimensions of 103 x 55 x 18mm and weighing in at a respectable 128g.

Everything that was good about the Nokia N95 is continued or bettered in the N96. It still features the crystal clear Carl Zeiss Optics 5 megapixel camera with video functionality, onboard GPS and rapid Internet connection. One of the more obvious additions comes in the form of the phones memory, doubling the previous 8GB of the N95 with a brand new 16GB worth of storage space. The voluminous capacity of the Nokia N96 allows users to store and transport a vast array of media and other documents on the move.

The Nokia N96 runs on the Symbian 9.3 Operating System being powered by a substantial 128MB of RAM, the quality of graphics and the clarity is second to none. The multitude of media applications, from live television to watching blockbusting movies, benefits hugely from the quality of the screen and the power behind it. With an inbuilt accelerometer, it’s also easy to rotate the screen to enjoy the wider aspect image for viewing films, movies or using the music player.

Initially, the Nokia N96 Quartz has been released on the O2 network in the UK, this means that consumers can connect the handset to a range of O2 tariffs depending on their usage requirements.

O2 Direct, the network behind the name will not be stocking this new phone, instead consumers wanting the N96 on an O2 tariff will need to purchase their handset from an independent retailer or dealership. O2 themselves are concentrating on the Apple iPhone and simply cannot subsidise the price of the new N-Series phone.