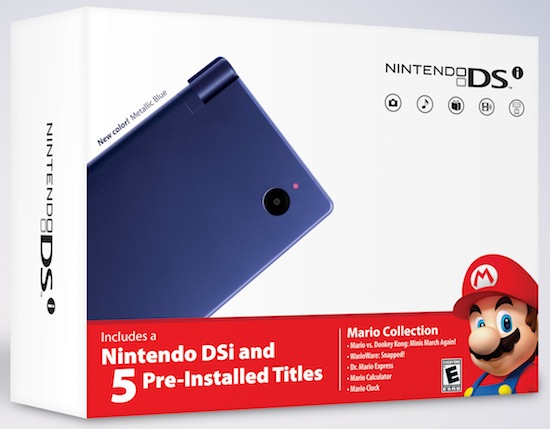 Two extraordinary releases from Nintendo are about to give Black Friday holiday shoppers an incredible value — but they won’t last long. Starting Nov. 27, U.S. consumers can purchase Metallic Blue or White Nintendo DSi™ systems that come pre-installed with more than $20 in software value. These Nintendo DSi bundles are priced for the holidays and will be available while supplies last at participating retailers nationwide.

“These limited-edition bundles come packed with some of the great Nintendo DSiWare games and applications that have made Nintendo DSi such a big hit with shoppers young and old,” said Cammie Dunaway, Nintendo of America’s executive vice president of Sales & Marketing. “The special price and pre-installed titles make the bundles a huge value for the holidays.”

Fans of global gaming superstar Mario™ will be especially eager to get their hands on the Metallic Blue Nintendo DSi, which comes pre-installed with five Mario-themed Nintendo DSiWare™ titles, including: 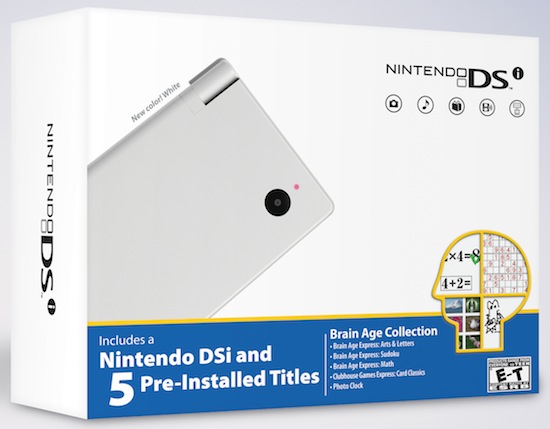 The White Nintendo DSi bundle is designed for anyone who has a passion for brain teasers. The special White system bundle comes pre-installed with the following Nintendo DSiWare title:

Nintendo DSi is the latest iteration of the world’s top-selling portable game system. Its unique features include dual screens, a touch screen and wireless networking capabilities to let friends near or far play together. Two built-in cameras and audio-manipulation functions let users create customized content and share it with others. Through the end of September, total worldwide sales of the Nintendo DS and Nintendo DSi game systems have reached more than 113 million, according to Nintendo’s financial statement. Of those, more than 33.4 million have sold in the United States through the end of September, according to the NPD Group.