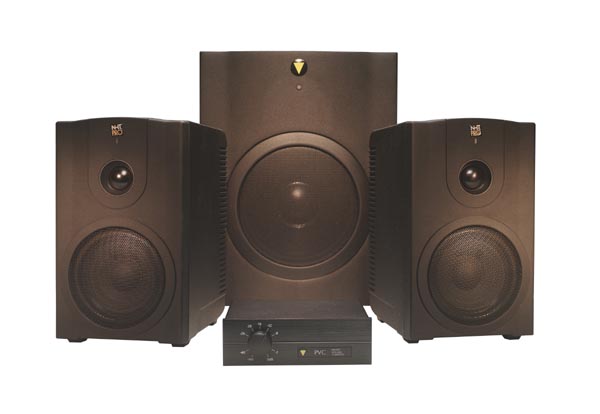 Under the terms of the agreement, ListenUp will carry NHT’s PC Hi Fi selection beginning later this month exclusively on its web site,
www.listenup.com. In addition to its web store, ListenUp has retail and commercial audio locations in Denver, Boulder, and Colorado Springs.
ListenUp is considered one of the country’s most prestigious audio/video specialists, particularly in the areas of design, installation, and
integration.

Included in NHT’s PC Hi Fi line are the M-00 (or as it is known in multimedia and pro audio circles, the “moo”), a compact, two-way
acoustic suspension speaker with a fully discrete power amplifier that provides 75 Watts RMS continuous output, 150 Watts peak. When combined
with the S-00 (“soo”) compact powered subwoofer and Passive Volume Control, end-users are rewarded with a multimedia sound system that is
transparent, detailed, and equal to or better than most home audio loudspeakers.

Visitors to NHT’s web site (www.nhthifi.com) will automatically be forwarded to the ListenUp site when clicking on any PC Hi Fi link.

“ListenUp first came across the NHT M-00’s when Walt Stinson [the company’s co-founder] was in the market for the best PC monitors to use with his portable music player,” explained Phil Murray, Marketing Manager, ListenUp.com. “After looking around and checking with a few contacts, he ordered the system for his personal use.

“Walt called and told me we need to carry the NHT because it was simply the best sounding multimedia speaker bar none.”

“For a large portion of the public, portable digital media players and PC’s serve as their primary, if not sole audio systems,” said Johnsen.
“So it only makes for more discerning users to seek out equipment that is light years ahead of the average system.”

Regarding NHT’s decision to make the M-00, S-00 and PVC available through retail, Johnsen noted that unlike other NHT near-field monitors
that are designed exclusively for professional end-users, “. the PC Hi Fi line, which was originally available only to the pro market, has
developed a strong following among professional engineers, sound designers and just about anyone who uses PC’s in home theater or other
demanding audio applications.”

The 75 Watt discrete amplifier, too, provides consistent low noise/high performance output, with magnetic shielding to allow use within
centimeters of a computer monitor. All the elements are housed in a cast aluminum zinc-alloy enclosure that acts as a heat sink, keeping the
amplifier cool, while its structural rigidity minimizes resonance and sonic coloration.

What sets multimedia speakers apart from traditional home loudspeakers is the need for accurate, transparent reproduction from a speaker that may be a few inches away from the listener. To this end, the M-00 includes a switch that makes it easy to tailor high frequency output for
either near-field or mid-field positions, with absolutely no loss of fidelity or detail. Frequency response in room is 80Hz – 20kHz. NHT’s
M-00 multimedia monitor measures
9″ (H) x 5.7″ (W) x 7.3″ (D), and weighs 14 lbs.

To extend the bass response without sacrificing clarity or detail, the S-00 powered subwoofer ($499) complements the M-00 as well as other
compact, powered satellite speakers.

The 8″ long-throw treated paper woofer cone reaches a low of 39Hz and when mated to the M-00 creates a spectacular, compact full-range system.
The cabinet – 13.25″ (H) x 10.25″ (W) x
13″ D; 30 lbs. – is constructed from ¾” medium density fiberboard, which is known to be acoustically neutral and structurally sound.

Since it was founded in 1986, NHT has continually challenged the notion that the very best sound reproduction must come at a premium price. NHT
takes pride in designing and marketing loudspeaker systems that provide a lifetime of listening pleasure. Its products from past to present
speak volumes of NHT’s dedication to sonic excellence. For more information, visit www.nhthifi.com. NHT (Now Hear This) is a brand name of Rockford Corporation. Rockford Corporation is based in Tempe, Ariz. and is a publicly traded company under the NASDAQ stock symbol ROFO. NHT’s website can be viewed at www.nhthifi.com and www.rockfordcorp.com.

In 1972, Walt Stinson and Steve Weiner founded ListenUp Audio/Video with one goal in mind, to offer the very best in sight and sound. From its
modest roots as a small storefront in a Denver residential neighborhood, to a company with over 100 employees and stores in Denver, Boulder and
Colorado Springs, ListenUp has established a reputation for being at the forefront of the home entertainment revolution.

From the very beginning, ListenUp set itself apart by offering its customers not only the finest products, but also the highest level of
service. This combination has contributed to ListenUp consistently winning Audio/Video Magazine’s coveted “Dealer of the Year” Award, and
has established the company as a national leader and pioneer in consumer and commercial electronics.