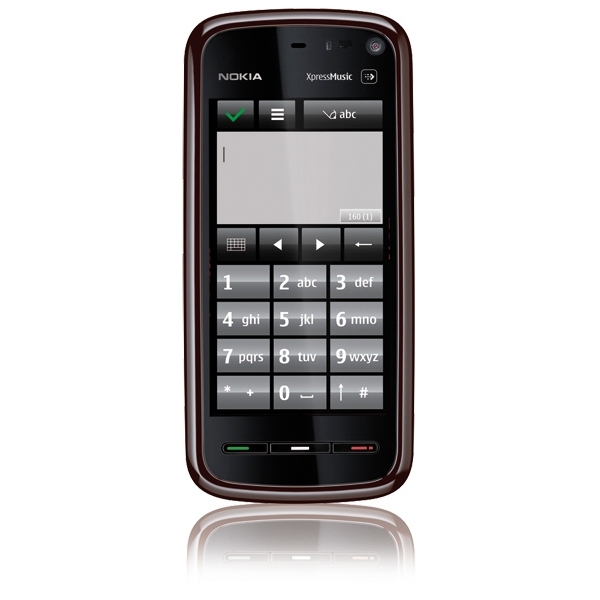 A new colour variant has now been released to compliment the original Nokia 5800 in black and the more recently launched blue edition, this latest addition to the Xpress Music range has been made available as a SIM free mobile phone with no network ties or contract commitments.

The Nokia 5800 Red Edition SIM Free phone is unlocked to all networks allowing consumers to simply carry on using their existing SIM card to retain their account details, current mobile number and any saved contacts.

Because this is a SIM free handset there are no network credit checks for consumers to worry about which will please many who may usually struggle to pass these strict guidelines, there is also no extra line rental charges incurred as there is no new contract, the consumer simply continues using their existing service whether that be on Pay As You Go or on Pay Monthly contract.

The new Nokia 5800 Red edition offers exactly the same amaing features and technology as the original black version aswell as the more recent blue edition however this new models exchanges the colour of the surrounding exterior band to a vibrant red and the back and front casing closely resemble a more burgundy finish.

The Nokia 5800 XpressMusic is the first full touchscreen mobile phone from Nokia thanks to a 3.2 inch touchscreen. The 5800 is the perfect music phone thanks to support for MP3 and AAC files, a 3.5mm headphone jack, expandable memory up to 16GB for loads of storage and running on the Symbian series 60 operating system. Also included in the Nokia 5800 is a 3.2 Megapixel camera, HSDPA ad Wi-Fi connectivity for high speed browsing, GPS with Nokia maps pre-installed and Bluetooth v2.0.

Nokia 5800 XpressMusic supports Flash content, individuals can surf the entire web, not just pieces of it. In addition, the Nokia 5800 XpressMusic offers all the music essentials, including a graphic equalizer, 8GB memory for up to 6000 tracks and support for all main digital music formats, and a 3.5mm jack. Built-in surround sound stereo speakers offer the industry’s most powerful sound.

And with FREE Nokia downloads for a year; this is music paradise in the palm of your hand.The spec blows away competitors like the iphone with a 3.2MP camera with flash and video capabilities, and with high speed connectivity through 3G, HSDPA and wi-fi you can upload your photos and videos on the move, Facebook won’t know what’s hit it when you have this phone in your hand!!

And with handwriting recognition, you can write out your texts with the stylis that fits snug in the back of the phone. And with up to an impressive 35hrs music playback and support for a 16GB micro SD card your music can go on and on!

Although initially only available as a SIM Free mobile phone it is widely expected that the new Nokia 5800 Red edition will be added to at least two of the major UK networks portfolios over the coming weeks.