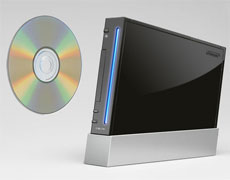 New System will be Forward-Thinking, Yet Backward Compatible

LOS ANGELES, May 17, 2005 — Each generation of video game consoles builds on the past to set new standards for the future. As the company with the strongest heritage of innovation, Nintendo redefines expectations for all next-gen systems by employing a wide-ranging strategy to attract more kinds of gamers to more kinds of games. When Nintendo’s new console, code-named Revolution, arrives in 2006, everyone will discover the meaning of All-Access Gaming.

“We will show the world what a next-gen system can be. Revolution marries the strongest heritage of innovation to the future of gaming,” says Nintendo President Satoru Iwata. “With backward compatibility and the ‘virtual console’ concept, the stylish, compact body provides maximum gaming power. It will not only take home entertainment into another dimension by expanding the definition of video games, but it also will give you access to the great history of gaming.”

Some of the system features that wowed the crowd at the Electronics Entertainment Expo (E3) in Los Angeles include:

The cool look: The new console boasts high-quality materials and a smart, compact design, approximately the size of three standard DVD cases stacked together. A variety of prototype colors are being showcased during E3. It will come with a silver stand that makes the system a welcome, artistic component of any multimedia setup, whether it’s displayed vertically or horizontally.

Two disc formats, one slot: Instead of a tray, a single, innovative, self-loading media bay will play both 12-centimeter optical discs used for the new system as well as Nintendo GameCube discs. Owners will have the option of equipping a small, self-contained attachment to play movies and other DVD content.

The stars: Introduction of a number of new franchise properties will add to the world’s richest stable of stars, including Mario, Zelda, Super Smash Bros., Donkey Kong and Metroid.

Wireless freedom: A number of Wi-Fi-enabled launch titles are in development that will employ Nintendo’s newly announced wireless gaming service, Nintendo Wi-Fi Connection. A worldwide network of Nintendo players can gather to compete in a comfortable, inviting environment.

Freedom of design: A dynamic development architecture equally accommodates both big-budget, high-profile game “masterpieces” as well as indie games conceived by individual developers equipped with only a big idea.

“Our next console proves small in size but big on ideas,” says Reggie Fils-Aime, Nintendo of America’s executive vice president of sales & marketing. “We’re throwing open the doors of gaming to wider audiences, from casual players to hard-core gamers who live for the thrill of defeating an endless army of wireless opponents.”

Nintendo’s All-Access Gaming philosophy covers the spectrum. The next console fits anywhere. It brings together new games and old. It gives people worldwide access through wireless Wi-Fi connections. And it opens the world of video games — to everyone. Software for the new console will even attract people who don’t consider themselves players. Adults, kids, men and women around the world will have access to the most popular video game characters, the best game franchises and the most engaging experiences yet developed — only with Nintendo.

The worldwide leader and innovator in the creation of interactive entertainment, Nintendo Co., Ltd., of Kyoto, Japan, manufactures and markets hardware and software for its popular home and portable video game systems. Each year, hundreds of all-new titles for the best-selling Game Boy Advance SP, Nintendo DS and Nintendo GameCube systems extend Nintendo’s vast game library and continue the tradition of delivering a rich, diverse mix of quality video games for players of all ages. Since the release of its first home video game system in 1983, Nintendo has sold nearly 2 billion video games and more than 336 million hardware units globally, creating enduring industry icons such as Mario and Donkey Kong and launching popular culture franchise phenomena such as Metroid, Zelda and Pokemon. A wholly owned subsidiary, Nintendo of America Inc., based in Redmond, Wash., serves as headquarters for Nintendo’s operations in the Western Hemisphere.

For more information about Nintendo, visit the company’s Web site at www.nintendo.com.