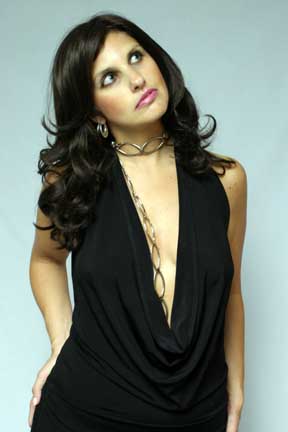 New songstress Allison Gayne has struck a chord among fans as she launches her first single, Crazy Mixed Up, on iTunes, Rhapsody and Amazon.com. The new song, which is a quirky tune about a woman in love with a “crazy good loving guy,” as is quoted in its lyrics, is now available on iTunes and Rhapsody under the search “Jay St. Records” as well as on Amazon.com

As a singer with seven years of vocal instruction under her belt, Gayne teamed with the new independent record label, Jay St. Records (JSR), over the summer to record Crazy Mixed Up,” which was written by Harry Henderson for MacKay Publishing. During the process, she received great help and support from JSR Executive Producer Harry Henderson along with her co-music producer and manager, Michael Pizzileo.

“Allison gets it in terms of getting into the heart of a song,” says Henderson. “She will do whatever it takes to get the desired performance. We are eager to showcase her New York style and streetwise attitude in her upcoming releases.”

“After years of having a passion for music, it is with great pleasure that I am able to finally share my love for music with the public at large,” says Gayne. “Crazy Mixed Up is a fun song that it can lift anyone’s spirits, which is representative of the uplifting music I want to deliver to my fans. I always pride on enjoying my musical experience and I want to ensure that my fans receive that same experience.”

Now that Crazy Mixed Up has been released, Gayne is busy working with Pizzileo and Henderson on a four to five song mini-album that will include her self-produced dance song, Peep Show, which will be followed by a full album debut in 2009.

“I am very excited about the new mini-album that we are working on,” says Gayne. “In this case, I am not only singing on the album but am also writing some of the music and lyrics. This gives allows me the opportunity to hone in on my creative juices. In writing my own music, I am able to capture the ultimate form of creativity and expression.”

After seven years of vocal lessons and participation in several talent shows, Gayne has seized her destiny as a professional vocalist. When she is not recording at the studio, she is busy writing songs and performing as a lead singer in the cover band, “The TurnUps.” She also works full time as a senior account executive for D. Pagan Communications, Inc., a leading full-service public relations and marketing firm specializing in the professional audio, video and technology. For more information about Allison Gayne and to hear her some of her music, visit www.myspace.com/alliband.

Based in Haledon, NJ, Jay St. Records (JSR) is an independent music development and marketing company that offers vast services including songwriting, producing, recording, manufacturing and distributing. Its core values are based on the JSR executive producer Harry Henderson’s childhood days on Jay St. in North Jersey. For more information on JSR, visit www.jaystrecords.com.