Apple today introduced the all new iPod nano, bringing video playback, an enhanced user interface featuring Cover Flow™, and an incredible new design to the world’s most popular music player. The new iPod nano features a larger two-inch display with 204 pixels per inch, which lets users watch their favorite movies, TV shows and music videos in the same resolution they currently enjoy on the video iPod. iPod nano also includes three fun games, and additional games can be purchased from the online iTunes Store (www.itunes.com). iPod nano delivers up to 24 hours of audio playback or five hours of video playback on a single charge, and is encased in a beautiful new all-metal design made with anodized aluminum and polished stainless steel and comes in five new colors–silver, black, blue, green and a (PRODUCT) RED special edition.

“We’ve taken the most popular music player in the world and added stunning video playback just in time for the holiday season,” said Steve Jobs, Apple’s CEO. “The iPod nano just keeps getting better and better with each new generation.” 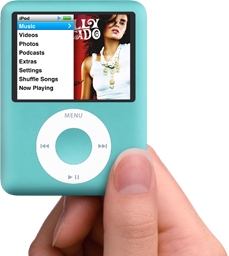 The all new iPod nano features a 204 pixel per inch display that is 65 percent brighter than the previous generation and delivers 320×240 resolution that is perfect for watching your favorite movies and TV shows on the go. iPod nano also features an enhanced user interface that shows off album artwork and photos like never before, and now includes Cover Flow, so you can scroll through your entire music collection by album cover artwork using the Click Wheel.

The all new iPod nano is perfect for playing iPod games and comes pre-loaded with iQuiz, the entertainment trivia game; Vortex, a fast-paced 360 degree brick-bashing game; and Klondike, the popular solitaire card game. Additional games will be available for iPod nano later this month from the iTunes Store, including Sudoku and Tetris from Electronic Arts and Ms. PAC-MAN from NAMCO.

iPod nano works seamlessly with iTunes so you can import, manage, and then easily auto-sync your favorite content. Buy music, video, and games for your iPod nano from the iTunes Store with more than six million songs available for preview and one-click purchase. With up to 24 hours of audio playback or five hours of video playback on a single charge,* the all new iPod nano is the ultra-portable way to enjoy your favorite music, TV shows and movies on the go.

The iPod is the world’s most popular family of digital music players with over 100 million sold. Today, Apple released its most exciting iPod lineup ever with the iPod shuffle in five new colors; iPod classic holding up to 40,000 songs; the incredible all new iPod nano with video playback; and the breakthrough iPod touch with a revolutionary multi-touch user interface. iPod owners can choose from a vast ecosystem of accessories with over 4,000 products made specifically for the iPod including cases, fitness accessories, speaker systems and iPod connectivity in over 70 percent of US automobiles.

Pricing & Availability
Available today, the 4GB iPod nano comes in silver for just $149 (US) and the 8GB model is available in silver, black, blue, green and a (PRODUCT) RED special edition for just $199 (US). Both the 4GB and 8GB iPod nano for Windows or Mac are available worldwide immediately through the Apple Store (www.apple.com), Apple’s retail stores and Apple Authorized Resellers. All iPod nano models include earbud headphones, a USB to 30-pin cable and a Universal Dock Connector.

iPod nano requires a Mac with a USB 2.0 port, Mac OS X v10.4.8 or later and iTunes 7.4; or a Windows PC with a USB 2.0 port and Windows Vista or Windows XP Home or Professional (Service Pack 2) or later and iTunes 7.4. Internet access is required and a broadband connection is recommended, fees may apply. The iTunes Store is not available in all countries.