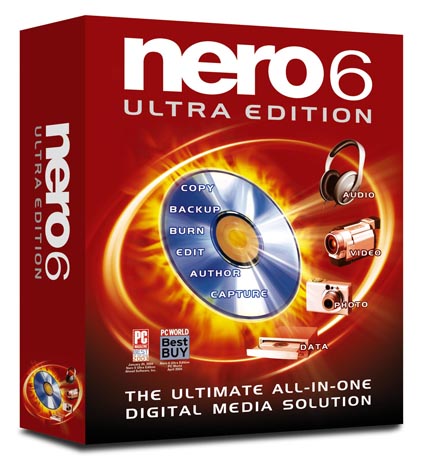 Top honors for Nero 6.6 by Editors and Readers alike

PC Magazine Editor’s Choice Award
Nero 6.6 received the Editor’s Choice award in PC Magazine (December 13, 2004) with a 4.5 out of 5 rating. This prestigious award recognizes outstanding performance and achievement for computer hardware software and electronics. “Nero has undergone a steady stream of improvements that now make Nero 6 Ultra Edition 6.6 the clear market leader,” wrote Don Labriola. “If you want a comprehensive solution that can handle a broad spectrum of content creation, backup and delivery chores, then Nero 6.6 is the package for you.”

Laptop Magazine Editor’s Choice Award
Nero 6.6 took the Editor’s Choice award and 4.5 stars in Laptop’s January 2005 issue. “Among those who know disc burning, Nero is probably the most revered name in the field, and deservedly so,” wrote William Van Winkle. “When we talk about keeping a curtain of simplicity over a wealth of functionality, Nero is the master.”

Maximum PC Third Annual Softy Awards
After winning the Kick A S S award in Maximum PC’s December 2004 issue, Nero 6.6 won a Softy Award in the February 2005 issue, which recognizes the finest, the fastest and the most innovative apps, utilities and games of 2004. “(Nero 6.6) It’s an absolute must for anyone who’s got an optical drive in the house,” wrote Maximum PC. “If you take the time to play with the other toys in the box, you’ll find that many of the 15 bundled applications and utilities rival stand-alone products that sell for the same price as the entire Nero suite.”

“It’s an incredible honor to be recognized for such outstanding achievement, functionality and design by the top publications in the industry,” said Udo Eberlein, President, Nero Inc. “These prestigious awards show how strong and successful Nero has become and are a tribute to how hard we have worked to get here.”

About Nero
Nero provides state-of-the-art software solutions for the global digital media market. Since the company was founded in 1995, its products have established a loyal clientele of more than 160 million users throughout the world.

Nero offers the industry’s most reliable CD/DVD-software applications. Its award-winning flagship product, Nero 6, includes all the applications and functionalities needed in the digital media field. Other Nero products include the MPEG 4 based audio/video technology – Nero Digital, the simple and complete photo solution – Nero PhotoShow Elite, and SIPPS and SIPPSTAR PBX, which provide voice-over IP solutions for private and business customers.

Nero products are globally distributed by leading hardware manufacturers, international distribution partners and online portals, as well as directly via www.nero.com. Nero Inc. in Glendale, California, USA and Nero K.K. in Yokohama, Japan are subsidiaries of Nero AG, based in Karlsbad, Germany.
###