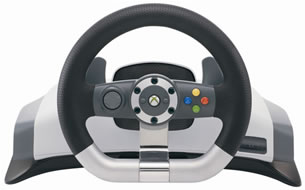 Action is precautionary and voluntary following reports of component malfunction.

Microsoft Corp. today announced that it is taking a precautionary measure and voluntarily providing customers with a free retrofit to the Xbox 360™ Wireless Racing Wheel.

The action is being taken after Microsoft was informed of a very small number of incidents of a malfunction in the Xbox 360 Wireless Racing Wheel, in which a component in the wheel chassis may overheat and release smoke when the AC/DC power supply is used to energize the wheel. There have been no reported incidences of fire, personal injury or property damage resulting from the component failure in the wheel.

Owners of the Xbox 360 Wireless Racing Wheel should stop using the AC/DC power supply until they have obtained their retrofit. They may continue to operate the wheel using battery power.

Owners of the Xbox 360 Wireless Racing Wheel should visit http://www.xbox.com/support or call Microsoft at (800) 4MY-XBOX (469-9269) to register for the free retrofit and protect against the potential hazard described above. Instructions, if necessary, will be provided with the retrofit. Microsoft is notifying and will be coordinating its response activities with the relevant regulatory agencies such as the U.S. Consumer Product Safety Commission. This may affect delivery dates.

About Xbox 360
Xbox 360 is a superior video game and entertainment system delivering the best games, unique entertainment features and a unified online gaming network that revolve around gamers. Xbox 360 will have a portfolio of more than 300 games and will be available in nearly 40 countries by the end of 2007. More information can be found online at http://www.xbox.com/xbox360.

About Microsoft
Founded in1975, Microsoft (Nasdaq “MSFT”) is the worldwide leader in software, services and solutions that help people and businesses realize their full potential.