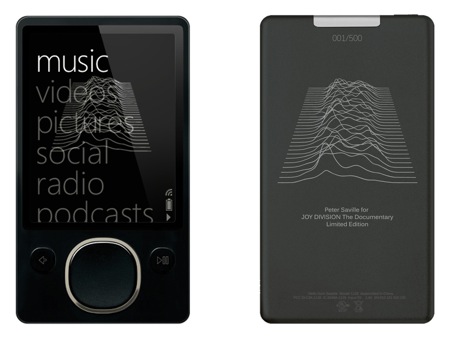 Today Microsoft Corp. announced that a limited-edition Zune digital media player designed by Peter Saville will be made available to commemorate the DVD release of “Joy Division,” the critically acclaimed documentary. The film will come pre-loaded on a custom black Zune 80 player that is etched with an adaptation of Saville’s iconic artwork from Joy Division’s “Unknown Pleasures” album. Five hundred limited- edition players will be available for purchase June 17 for $399.99 through http://www.zune.net and http://www.zuneoriginals.net. In addition, Zune Marketplace will feature exclusive outtakes from the DVD.

“Joy Division” chronicles the story of the seminal post-punk band via firsthand accounts from the surviving band members and those who worked closely with them during their brief but highly influential existence.

“Partnering with Zune gives us a unique platform to tell the story of an iconic band and present something special to their fans,” said Tom Atencio, the film’s co-producer. “It also opens the door to a whole new world of possibilities regarding innovative promotion and distribution methods for independent films.”

The DVD release of Joy Division is also set for a June 17 release through Genius Products and The Weinstein Company, and has been widely praised for highlighting the enduring influence of the Manchester quartet while poignantly conveying the story of their brief career. The film was directed by Grant Gee, director of “Meeting People Is Easy” and “Demon Days.”

“We appreciate the opportunity to create a customized product in conjunction with an important project like the ‘Joy Division’ film,” said Richard Winn, director of Entertainment Development for Zune. “Building innovative consumer experiences around music and providing a platform to showcase the work of artists is what Zune is all about.”

“We are happy to be involved in this innovative alliance with Zune, and we’re honored that Zune chose our film ‘Joy Division’ for its limited-edition player,” said Barry Gordon, executive vice president of Home Entertainment at The Weinstein Company.