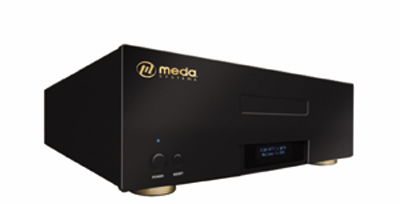 New models of the breakthrough home entertainment devices include the full-featured Bravo 16 and Bravo 20 music servers, designed for large homes with many rooms and listening zones; and the ultra-compact Bravado 1 and Bravado 4 music servers, designed as space-saving alternatives for smaller residences, while preserving Bravo’s most important features.

As with all Bravos, each zone in the Bravo 16 and Bravo 20 offer independent control of each server’s built-in preamp and unique-built-in digital matrix switcher via built-in TV, infrared, web browser, wireless Pocket PC, or PC desktop interfaces. Multiple zones can be linked and synchronized via Meda’s patent-pending MZSync technology, a key element of Meda’s DEOS Digital Entertainment Operating System.

The new ultra-compact Bravado 1 and Bravado 4 music servers are only 3 inches tall and 11 inches deep, allowing them to fit into the tightest of rack spaces, or even ventilated in-wall installations like structured wiring cabinets. Bravado is an ultra-compact version of Bravo designed for small spaces such as structured wiring applications, and shares most Bravo features.

Bravo Essentials
All Bravo music servers use fast, quiet, massive internal hard drives and a home’s own network to record, store, and play back digital audio content as entertainment-on-demand through multi-room audio or audio/video systems. The Bravo server replaces the user’s CD player and holds an entire music collection of tens of thousands of songs. It can be operated from any of a multitude of visual or tactile control devices, including universal remotes, TVs, PDAs, wireless Pocket PCs, computer browsers, Web pads, and in-wall keypads.

A unique built-in matrix switcher in each Bravo server routes audio from multiple hard-drive, network, line level and CD sources to multiple analog and/or digital outputs. It can direct any content from any source to any zone or combination of zones simultaneously, while other sources continue to play in other zones. MZSync technology keeps each zone in perfect audio sync with other zones throughout the house.

Bravo servers provide users with the powerful ability to transfer or play music files from other computers on their home’s local network. They can store thousands of CDs on each Bravo’s internal hard drive, add more capacity with optional storage drives, and back up or sync their music collections with other computers, other Bravo servers, or to an optional internal backup drive.

Each Bravo system includes ready-to-use control software for wireless touch-screen control from a Pocket PC, desktop PC, TV screen, or other computers’ Web browsers. No programming is necessary when using a Bravo music server as a stand-alone whole-house music system. Bravo server set-up is quick and simple and can be performed using a TV, a laptop or any Web browser. No PC is required for operation.

The Bravo 16 and Bravo 20 music servers, and Bravado 1 and Bravado 4 music servers, are available now from authorized Meda dealers. They were seen with Meda’s other outstanding products in Booth 21813, Las Vegas Convention Center, South Hall 1, during CES.