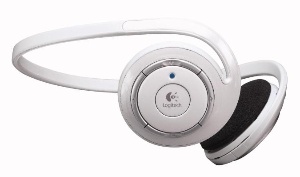 FREMONT, Calif. & ROMANEL-SUR-MORGES, Switzerland, June 22, 2005 — No more tangles, snags or kinks: Now music lovers can free themselves from the cords tethering them to their iPod and receive high quality sound — wireless headphones for the iPod have arrived. Logitech (NASDAQ:LOGI) (SWX:LOGN), a leading provider of cordless peripherals for a variety of platforms, today introduced the Logitech Wireless Headphones for iPod. People can simply plug in the wireless adapter, set their iPod down, and move as far as 30 feet away — without ever missing a beat.

“Wireless headphones unleash people from their music player and remove the nuisance of cords,” said Ray Weikel, director of product marketing for Logitech’s Audio Business Unit. “No more untangling those earbuds when you pull your iPod out of the bag, or managing the cords while trying to enjoy your music. We believe our wireless headphones will truly be liberating for iPod owners.”

The Logitech Wireless Headphones for iPod are the result of Logitech’s combined expertise in wireless technology, award-winning audio products, and innovative industrial design. They feature integrated iPod controls on the side of the headphones, so people can adjust the volume as well as track forward, track backward, play and pause their playlists — while the iPod rests untouched on the counter, in a workout bag or in a pocket. And, the headphones use advanced Bluetooth 1.2 wireless technology, which includes adaptive frequency hopping, for interference-free, crystal-clear digital audio. The 40 mm full-range neodymium drivers provide rich audio and enhanced bass performance.

The Logitech Wireless Headphones for iPod are designed for a secure and comfortable fit. The behind-the-head headband is lightweight, flexible and durable — making it ideal for use in a variety of settings. The headphones weigh a mere 3.2 ounces and the wireless adapter, which connects to the iPod through the headphone jack, weighs just over 1 ounce.

The headphones work with any iPod with dock connector on its base, which includes nearly all models sold in the past two years. The headphones and the adapter are paired at the factory, so people can instantly begin using the product with their iPod directly out-of-the-box. The headphones are powered by rechargeable batteries, which play up to eight hours of music per charge. The product can be fully recharged in 2.5 hours. Both the adapter and the headphones can recharge simultaneously with the provided AC adapter, which features two connectors.

Logitech Wireless Headphones for iPod are included in the “Made for iPod” program. “Made for iPod” means that an electronic accessory has been designed specifically to connect to iPod and has been certified by the developer to meet Apple performance standards.

Pricing and Availability
The Logitech Wireless Headphones for iPod will be available in retail stores and online, including Apple stores and http://www.logitech.com, in July throughout the U.S. and Europe. The suggested retail price for the product is $149.99 in the U.S.