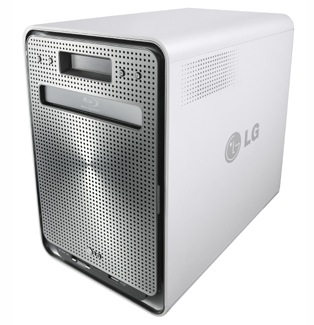 Designed for the sophisticated tech consumer and the small office-home office (SoHo) user, LG’s CES Innovations Award-winning NAS device combines a secure storage option for large amounts of data with the capability to read and write in high definition.

Smart Data Management
The world’s first Network Attached Storage device with a built-in Blu-ray drive (model N4B1) attaches to a network instead of PC to enable efficient and secure data storage. Its capacity can be expanded by a four-bay storage configuration to a maximum of 4TB. To facilitate easier archiving, the N4B1 automatically creates a content catalog when data is saved to the Blu-ray disc. Additionally, the management system automatically tracks what is downloaded, saving business owners and consumers’ time and space by not duplicating files. Additional features include:

Compact Blu-ray Burner
The LG BE08 Blu-ray disc drive adds a high-definition component to help consumers transform the home office into a mini home theater. Its increased Blu-ray read and write speed of 8X is among the world’s fastest: the BE08 can burn a full single layer BD disc (25GB) in only 13 minutes versus an average of 23 minutes at 4x for other devices. It also up-converts standard DVDs to near-HD levels. The unit’s software also includes a new function that allows consumers to record high-definition content to a Blu-ray disc.