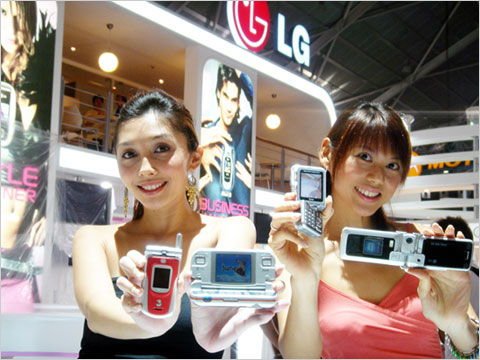 “LG Electronics has made another futuristic proposal to the mobile communications industry with these innovatively designed handsets. With these six models, we continue our efforts to lead and innovate mobile lifestyles for consumers,” said Mun-hwa Park, President & CEO of LG Electronics Mobile Communications Company.

The six new models are fully equipped with state-of-the-art multimedia functions and design is unprecedented and innovative. These are the new mobile phones:

DMB phone (SB120)
The mobile broadcasting phone, SB120, enables those on the move to enjoy crystal-clear video, CD-quality audio and satellite-transmitted data. Contrary to conventional satellite DMB models, users can savor video-on-the-move service with the SB120 through a monitor that pulls back 360 degrees. This model has a 2-megapixel camera supporting auto focus functions.

Up & down slide phone (LP3900)
The new slide phone, LP3900, has a two-layer display and the upper monitor screen moves both up and down the inner. Bluetooth technology also makes cordless connections possible. It supports an AV handset function enabling equalization so that users can enjoy MP3 with real sound. This model adopts multi-tasking functions so that users can enjoy games, SMS, video/photo shooting and wireless Internet service while listening to MP3 music.

3-D game phone (SV360 / KV3600)
The first cell phone ever armed with a 1 million polygon/second graphic accelerator chip processes data five times faster than currently available chips and allows users to play games with more minute and realistic 3-D graphics. The phone is also equipped with acceleration sensors that allow the user to control the game by moving it up and down or left to right, maximizing enjoyment. The phones are equipped with a 2.2-inch LCD screen, allowing users to play 3-D games with increased screen quality.

Real MP3 music phone (KP4400)
The real MP3 music phone has a multi-tasking feature that allows users to place or receive calls and play games while listening to music. It has 256MB memory for MP3 and a real 5-band equalizer, allowing it to connect to real audio equipment.