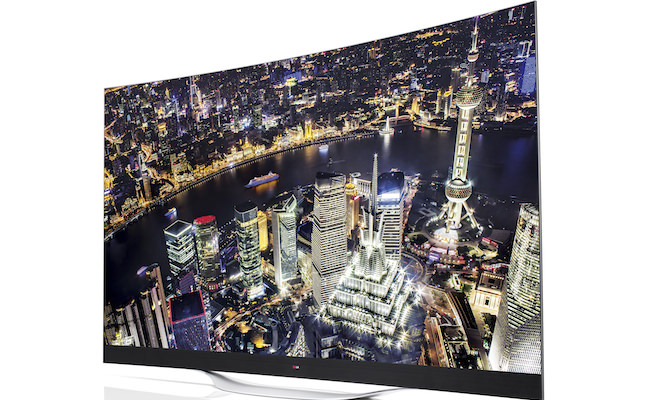 LG announced two new Ultra HD 4K TVs will be available in the U.S. this fall that use OLED technology. The LG 65EC9700 (65-inch) and LG 77EG9700 (77-inch) will sell for $10K and $25K respectively. “LG 4K OLED TV is a technological achievement that will set a new standard for the way consumers think of picture quality”, said Tim Alessi, Director of New Product Development for LG Electronics USA.

LG’s TVs can display native 4K content in its full glory as it incorporates new technology standards – such as the latest HDMI interface and H.265 decoding – capable of handling Ultra HD programming, whether it’s streamed over the Internet or playing from a USB or HDMI source. With these technologies on board, consumers will have an Ultra HD TV that will be ready to accept new sources of 4K content as they become available. (Both models exceed the Consumer Electronics Association’s new requirements for “Connected Ultra HDTVs”.) These new sets include LG’s Tru-4K Engine Pro which uses a dual-chip, 6-step process to upscale HD content into 4K, providing a stunning viewing experience for legacy content as well.

With LG’s WRGB OLED technology each pixel is made up of four sub-pixels, which equals roughly 33 million sub-pixels working to produce the most lifelike color and level of detail. Since no backlight is required, OLED can also reach black levels that are immeasurable, providing an infinite contrast ratio, one of the key elements of display performance. Also unique to OLED is the revolutionary new design approach that drastically reduces the thickness to an amazingly thin, 4.5 millimeters at their thinnest point, which is the depth of just a few credit cards. These models also feature a subtle curved screen and due to the televisions’ frameless, bezel-less “Cinema Screen” design, the picture on the screen virtually stretches from edge-to-edge.

With LG Smart TV+ webOS, consumers have an intuitive interface that offers lightning-quick transitions between broadcast TV, streaming services and external device. Those features were developed around the core concepts of Simple Connection, Simple Switching and Simple Discovery and are accessible via one click on the “launcher bar” menu and the transition speeds are similar to regular channel switching. The platform also features recommendation capabilities to help consumers sift through its expansive content options, which include streaming services like Netflix, YouTube, Amazon Instant Video and Hulu Plus and more.

Both the 77-and 65-inch class 4K OLED TVs are wall mountable to offer installation flexibility, satisfying consumers who are seeking a stylish and cinematic wall-mounted television, or an elegant, leaf-shaped stand for table top use.

Reviewed.com6 years ago
You Are Here