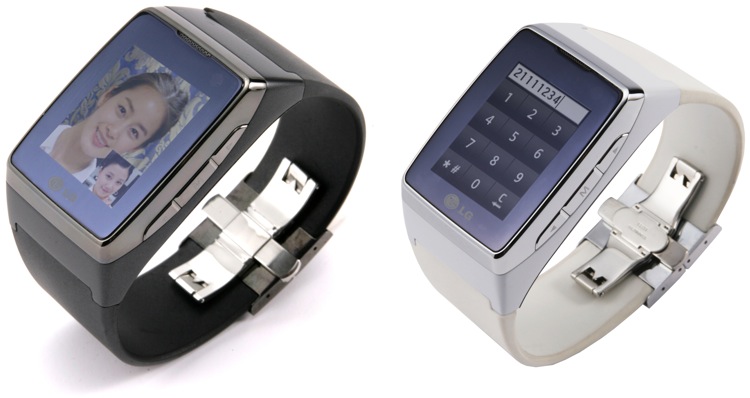 LG Electronics, a worldwide technology and design leader in mobile communications, will demonstrate the world’s first market-ready Touch Watch Phone (LG-GD910) with 3G Video Telephony (VT) service and GSM Network capabilities at Mobile World Congress 2009. The phone was a sensation when it debuted at Consumer Electronics Show in January.

During the exhibition, LG will hold live demonstrations to show how the phone can be used to make video calls. This is a unique feature among watch phones and shows how advanced LG’s wearable mobile really is. The demonstrations will take place at LG’s booth in Hall 8 of Fira de Barcelona from February 16-19, 2009.

This chic, wearable phone is a follow-up to the prototype that LG introduced in 2008 and includes a number of upgrades, such as a full touchscreen interface, 3G capabilities and video calling. Most importantly, this watch phone will actually be available for purchase.

“Our new 3G Touch Watch Phone is stylish, sophisticated and the height of technology, but it’s also undeniably fun. How else can you reenact those scenes from your favorite sci-fi or spy movie?” said Dr. Skott Ahn, President and CEO of LG Electronics Mobile Communications Company. “LG is the first company to introduce a mobile phone with the wearable device technology. We will continue to develop category-creating products to form a new market, based on our technological leadership and design capability.”

At first glance, LG’s new Watch Phone appears to simply be a high-end timepiece. The company used materials and stylistic elements found in watches from top manufacturers to ensure that people will be comfortable wearing it for any occasion. The Watch Phone has a curved tempered glass face, high quality metal casing and is a mere 13.9mm thick.

The Watch Phone is as technologically advanced as it is stylish. It is the first touch watch phone in the world to feature 7.2 Mbps 3G HSDPA compatibility, enabling high-speed data transmission and video phone calls using the built-in camera.

LG did not sacrifice functionality in favor of size and the Watch Phone is fully capable of sending text messages, making phone calls, and, of course, keeping accurate time.

This is all achieved using the phone’s touchscreen interface on its 3.63cm (1.43-inch) screen and LG’s intuitive Flash Interface.

Voice recognition features, which can be used with or without a Bluetooth headset, make it easier to place calls and look up contacts.

Text to Speech (TTS) reads text messages and other information out loud for even greater convenience.

The phone also includes stereo Bluetooth and a built-in speaker for playing back music files. A large phonebook and scheduler help with organization.

“This Watch Phone is the result of a great deal of research and development, something that is very important to us at LG. We will continue to invest in creating innovative new products and technologies like this and setting trends in the mobile phone industry,” Dr. Ahn said.

In addition to video calling, The Watch Phone has other features including its Flash Interface, MP3 player, Voice Calling, Text messaging and Text to Speech. The phone will be available in Europe at the end of this year.

Orange will be the first to bring the Watch Phone across its European footprint later this year.