Kodak today announced the EASYSHARE TOUCH Digital Camera featuring a 3-inch high resolution capacitive touchscreen LCD. It also features a dedicated video record button that makes it simple to take 720p HD video that you can edit and share right on the camera. The EASYSHARE TOUCH Camera also has an auto organization feature that sorts by people, date, keywords and videos so it's easy to find the moments you want to share. You can even customize a caption directly on the camera to be uploaded with your picture when it's shared.

With 14 MP and a 5X wide-angle SCHNEIDER-KREUZNACH Optical Zoom Lens, the camera also boasts Kodak's Smart Capture and Face Recognition features, multiple scene and artistic modes, like photo booth and film effects, to have more fun with your pictures, and an HDMI connector so you can enjoy your pictures and videos on your HD TV. 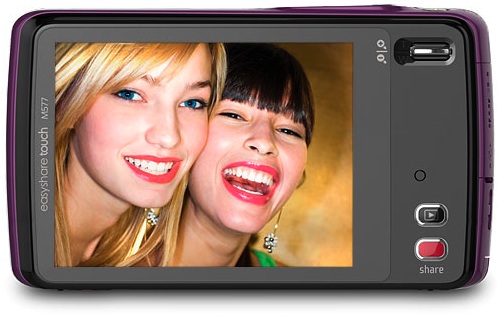 Price and Availabililty
The EASYSHARE TOUCH Camera will be available in silver, black, red-orange, purple and red for U.S. $149.95 in spring 2011.